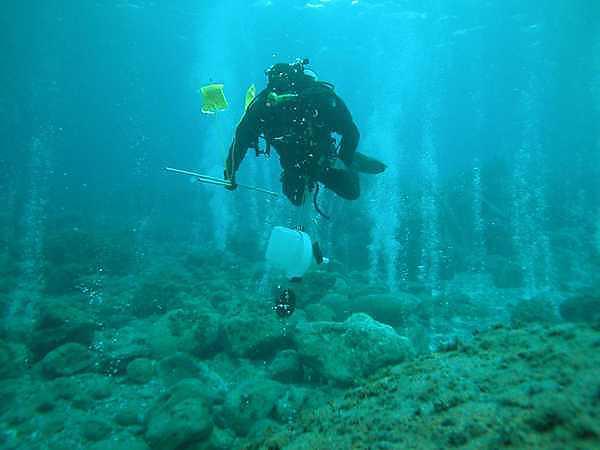 Scientists have discovered that stunted growth can be a genetic response to ocean acidification, enabling some sea creatures to survive high carbon dioxide levels, both in the future and during past mass extinctions.

Using natural CO2 seeps as test sites, the international team of marine scientists and palaeontologists have studied the way in which sea snails cope in more acidic conditions ‒ simulating the change in seawater chemistry that will occur in future as more atmospheric CO2 is absorbed by the ocean.

The researchers say their findings, published in Nature Climate Change, provide an explanation as to why marine species that survived previous mass extinction events were much smaller – a phenomenon known as the ‘Lilliput effect’.

The research was funded by the EU MedSeA project and the UK Ocean Acidification Research Programme, and involved researchers from 10 institutions including Plymouth University, the University of Southampton, the Natural History Museum, London, and colleagues in Italy, Monaco, Norway and New Caledonia.

Its results provide a stark warning about the impact that continuing ocean acidification could have on marine ecosystems unless we drastically slow the rate of carbon dioxide emissions.

“Two species of snails growing at shallow water CO2 seeps were smaller than those found in normal pH conditions, and adapted their metabolic rates to cope with the acidified seawater. These physiological changes allowed the animals to maintain calcification and to partially repair shell dissolution.”

Professor Jason Hall-Spencer, of the School of Biological and Marine Sciences at Plymouth University, said:

“Organisms that have been exposed to elevated CO2 levels over multiple generations provide valuable insights both into changes we can expect in marine ecosystems as CO2 emissions continue to rise unchecked, and into past mass extinctions."

“Not only do they demonstrate a similar magnitude and direction of body size change as fossil organisms, but they also reveal the physiological advantages of dwarfing,”

Measurements showed that the shells from high CO2 seawater were about a third smaller than those in “normal” environments. Some of the snails were taken to the Marine Environmental Studies Laboratory at the International Atomic Energy Agency in Monaco, where their calcification rates were measured in aquaria.

“They developed a surprising ability to calcify and cope with shell dissolution at pH values which were thought too low for calcification to occur.”

The results – published in the paper Physiological advantages of dwarfing in surviving extinctions in high CO2 oceans – confirmed the theory that the snails had adapted to the conditions over many generations.

Professor Richard Twitchett, of the Department of Earth Sciences at the Natural History Museum, said:

“The fossil record shows us that mass extinctions and dwarfing of marine shelled species are repeatedly associated with episodes of past global warming. It is likely that similar changes will increasingly affect modern marine ecosystems, especially as the current rate of ocean acidification and warming is so rapid."

“It is critical that we understand the mechanisms by which certain species survive chronic exposure to elevated CO2 since emissions of this gas are already having adverse effects on marine foodwebs and putting food security at risk.”