The impact of forced displacement on Syria’s traditional crafts and cultural heritage, and the people directly involved in it, is to be analysed in a new research project.

Academics from the University of Plymouth will study the industries that have survived among refugee communities forcibly displaced to the neighbouring state of Jordan since 2011.

They will assess ways in which male artisans have been forced to adapt in exile and away from their traditional processes, materials and studios, and the impact this has on the finished products. Training and advice programmes will also be developed with the aim of allowing the men involved to grow their work into sustainable social enterprises.

The research is being led by Dr Haya Al-Dajani, Associate Professor (Reader) in Entrepreneurship at the University of Plymouth, and funded from the Global Challenges Research Fund Economic and Social Research Council (ESRC)/Arts and Humanities Research Council (AHRC) Forced Displacement call 2016.

It will contribute to the aims of the call by focusing on the experiences, vulnerabilities and resilience of Syrian artisan men forcibly displaced to Jordan since the war in Syria erupted in 2011.

“Traditional Syrian arts and crafts are highly valued in the Arab world for the quality of the workmanship. But five years of civil war has destroyed the studios and factories where many artisans were employed, and they have been forced to flee as refugees. It is possible that both quality and productivity have been negatively impacted as a result, but assessing how these traditions are being continued could help others facing similar challenges in the future.”

The study also involves co-investigators from the University’s Faculties of Business and Science and Engineering, including Professor of Human Geography Geoff Wilson, a renowned researcher in fields of community resilience and environmental transitions, and the Director of the Futures Entrepreneurship Centre, Dr Marta Hawkins, an expert in creative industries, cultural identities and strategies of coping among creative entrepreneurs.

They, in turn, will work with two organisations based in Jordan – the King Hussein Foundation Information and Research Centre, and TIRAZ, a centre dedicated to preserving Arab cultural heritage and living traditions.

During the course of the two-year project, the research team will stage up to 80 interviews with Syrian male artisan refugees, to find out more about their resilience, the challenges they face and how they have adapted their Syrian artistry.

Working with Jordanian agencies the researchers will then aim to train people in the establishment, and successful operation, of social enterprises, which could potentially have a positive impact on the Syrian community in Jordan, the host nation and its economy, and other forcibly displaced communities such as Iraqis and Palestinians.

“Our previous work has always focussed on women refugees while this centres on traditionally male-dominated industries. That gives it a different dynamic straight away, but then we are also looking at men whose evolved skills are helping to keep historic traditions alive. So while they could initially have been forced to flee Syria in order to keep providing an income for their families, they are now playing a significant role in preserving the cultural heritage of their homeland.”

Poverty Alleviation and Women Refugees in the Middle East: Empowerment through Grassroots Micro-Entrepreneurship

The project, approved in April 2016, will examine the extent to which entrepreneurship is a catalyst for empowerment and poverty alleviation among women refugees in Arab countries, and was awarded £337,451.82 by the Economic and Social Research Council

Academics from Plymouth and the University of Nottingham will work alongside researchers in Jordan, Lebanon and Turkey
Read more about the research project in our news release 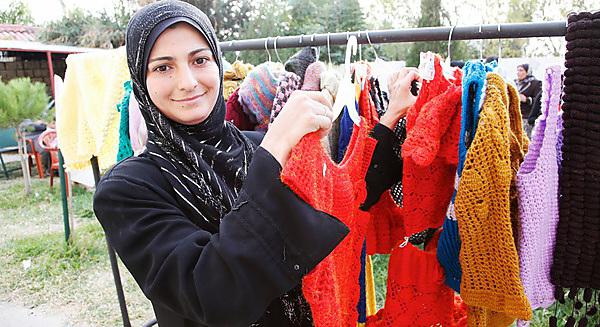