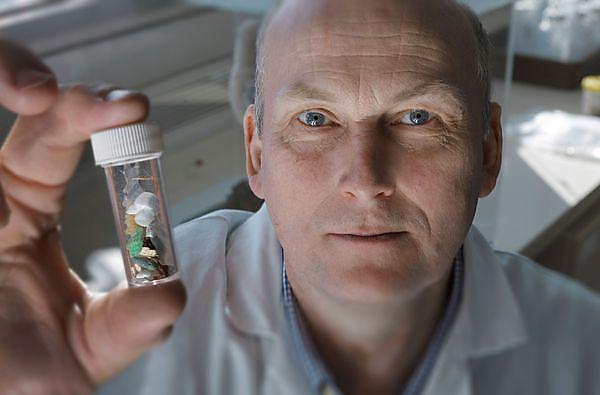 A leading marine scientist has welcomed news that government legislation on charges for plastic bags has led to a substantial reduction in their use.

Richard Thompson, Professor of Marine Biology at Plymouth University, has been studying the effects of plastic litter on the marine environment for over 20 years, and his work has informed policies on plastic bag legislation in the UK, Europe, Australia and United States.

He said figures released by supermarket giant Tesco – showing a 78 per cent reduction in plastic bag use – demonstrate a growing realisation that short term use of plastic items can be avoided.

However, on its own he said the bag tax would not solve the problem of plastic litter in the environment and that to achieve this, manufacturers also need to look at the items taken home in our shopping bags and establish a wider range of ways to reduce the accumulation of packaging waste.

This would require designing to maximise recyclability as well as reusability, coupled with consumer education to promote responsible disposal of end-of-life plastics.

The 5p levy was introduced by the government at the beginning of October, in an attempt to reduce the use of single-use carrier bags and the litter they can cause.

“The news that a leading UK supermarket declared an almost 80 per cent reduction in the number of bags being requested by its customers confirms single-use plastic bags can be avoided. Globally we produce over 300 million tonnes of plastic every year and around 40 per cent is for single-use items, including plastic bags. These items have a short life-in-service, but will then persist in the environment as waste for years to come, hence the accumulation of end-of life plastic items presents a major challenge for waste management and as litter in the natural environment.”

Over the past decade, Professor Thompson has published dozens of papers on plastic debris in the environment; including work demonstrating that plastic bags are slow to degrade in the sea, can be harmful to wildlife and affect marine habitats compromising ecosystem services.

His research has also shown that in the environment plastic items, including bags, can fragment into millions of tiny particles – which he and colleagues refer to as ‘microplastics’ – which can be ingested by a range of organisms, potentially damaging them.

“It is sometimes suggested that biodegradable plastics are a solution, however designing plastic that would fulfil its life in service, but could somehow recognise when it has ceased to be useful and so begin to rapidly degrade, would be very challenging. As a consequence most biodegradable plastics are slow to degrade and need specific environmental conditions to do so, typically requiring, light heat and oxygen. In short, biodegradable plastics are not a solution to the problem of marine litter and in this regard we need to think very carefully about any exemptions to the 5p charge, or our legislation will fall short of the mark.”

This image, captured at Plymouth University’s Electron Microscopy Centre, shows some of the many microscopic fragments formed by the deterioration of a ‘degradable’ plastic bag ten years after it was given out at the till of a major UK supermarket 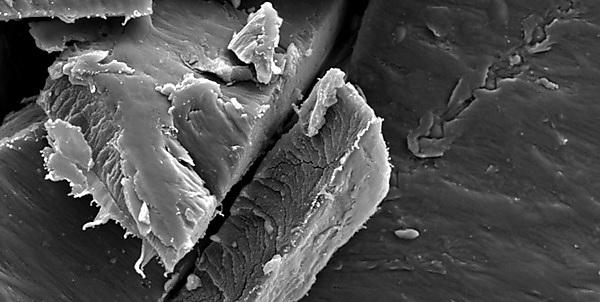 A case study from the Research Excellence Framework looking at the work of Professor Richard Thompson, and his investigation of the threat of microplastics in the ocean. 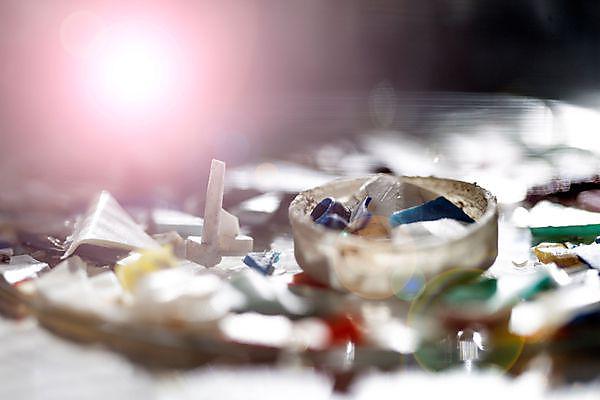