Emily Stevenson with a Marathon wrapper found on a beach in Cornwall. The chocolate bars haven't been sold in the UK since 1990

The 21-year-old is currently completing the final year of a BSc (Hons) Marine Biology course, with her dissertation focusing on the presence of plastic pollution within our seas and the impact it is having on marine wildlife.

But at the same time, she has helped her dad Rob launch a community interest company – Beach Guardian – to educate people about the role they can play in reducing the impact of litter and marine debris on our coastlines.

The organisation only began as a page on Facebook, launched in October 2017 and through which the family shared details of the items they and friends found during beach cleans close to their home in North Cornwall.

But in part thanks to a series of amazing finds – including intact crisp packets dating back several decades – her efforts have gained international attention.

Emily’s quest to try and tackle the problem have been sparked by her own passion for the coast, which was ignited during family holidays to Cornwall and has grown since they moved to a village near Padstow when she was 10. She said:

“Whenever we used to come to Cornwall, I always loved spending hours and days on the beach. But when I see something on the beach that really shouldn’t be there, like a piece of litter, it really upsets me.

"I knew I had to do something, and used it as the inspiration for an art project when I was 11. But Beach Guardian is the perfect opportunity to make a positive difference and to encourage people of all ages to get involved in the campaign.” 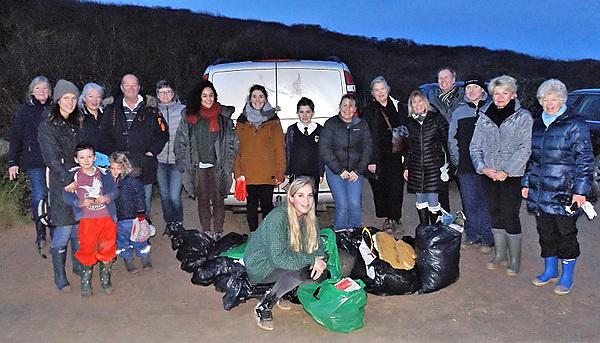 Within a couple of months of its launch, the Beach Guardian team was joined on one of its beach cleans by journalists from the Daily Telegraph, during which they found a crisp packet with a best before date from 1997.

Since then they have found even older products, including crisp packers from 1987 and (most recently) one from the late 1970s.

This has led to approaches from other marine charities, including Surfers Against Sewage, and Emily and her dad recently organised their first school visit, where they found eye-catching ways to demonstrate the scale of the marine litter problem to primary school pupils.

Once she graduates this summer, she hopes to expand on that, helping more children to gain an understanding of the problem and how they can play an active part in its solution. She added:

“In Cornwall you are never far away from the coast, so children here really understand the problem. By educating them, they go home and tell their parents and friends so it is a great way of getting the message out there. But I hope this could go much wider, and that we can set up school visits right across the country and even internationally as well. When we are talking to people, we are often asked whether they can make a real difference.

"It’s fair to say that the big solutions to the overall problem of marine litter might need to come from designers, governments and manufacturers. But we can all make a difference, and if everyone was able to make a small change the impact of that would be huge.”

Some of the plastic items found during a Beach Guardian clean

Find out more about Beach Guardian