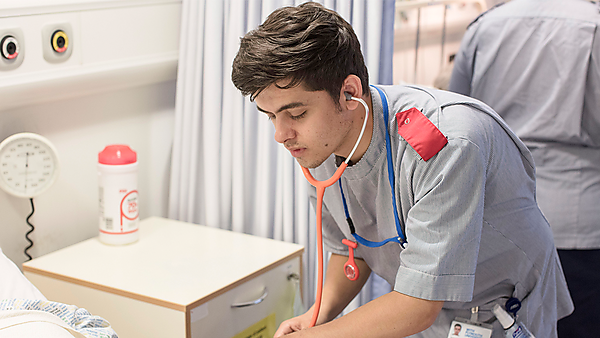 This unconscious bias is on the way to being addressed on the medical front as female medical student numbers have escalated in recent years – with women now accounting for over half of medical professionals at a training grade. Yet the amount of men training to become nurses has plateaued for decades at between 8-11 per cent.

There is a misconception that Florence Nightingale ‘invented’ nursing, yet men have historically cared and nursed people as far back as Ancient Rome and Greece, on the medieval battlefields, within monasteries and during the European black plagues.

Despite the history, there are many suggestions for why this gender imbalance exists within nursing, and societal opinion is certainly one of them.

The stereotypical view of nurses being female handmaidens to doctors, as opposed to autonomous skilled practitioners, has been widely held both within professional settings and the general public.

Outdated job titles such as ‘Sister’ and ‘Matron’ have not really helped the profession encompass men within nursing. The perception that nursing is a low-paid vocation and not a career may also have deterred men from entering the profession.

People are living longer, the NHS is stretched, and we need more nurses to meet a national need, but public misconceptions mean that we as a society are already alienating 50 per cent of a potential workforce.

In 1985 whilst studying my A levels in rural Cornwall I first started to think about nursing as a career choice. I had no family association to nursing, but had visited hospital casualties many times with broken bones and was always amazed at the friendly, caring approach of nurses towards me.

After a successful interview, I was accepted to start my nurse training at the Plymouth School of Nursing based at Derriford Hospital. But I was one of four men in my nursing cohort out of the 28 new starters, and we were really seen as a novelty.

Fellow nurses and patients were often intrigued as to why I wanted to be a nurse. A common misconception was that I was a failed doctor or wanted to train to be a doctor after I had completed my nurse training and, despite a career which has seen me nurse on surgical wards before a seven-year spell working as a Practice Development Charge Nurse – this never changed as I went on. It hasn’t changed now – people assume that you’re not as clever as a doctor, and as a male you should want to ‘go higher’.

After years of sporting injuries and care from health professionals, Cornishman Kevin Hambridge decided nursing was the career for him. But he is one of a small minority in a profession mostly comprised of, and often marketed towards, women.

During my time as a Practice Development Charge Nurse at Nuffield Hospital, I became involved in research and completed my masters degree. After spending time mentoring student nurses to facilitate them to gain their competencies I decided that I would train to become a university lecturer to inspire and educate the student nurses of the future.

After a further two years of post-16 teacher training at night school, I commenced my role at the University of Plymouth as a Lecturer in Adult Nursing in 2004.

The truth is that nursing is not only a caring role, but a fantastic career path – and we need more people to go into it.

In addition, men are often portrayed on television as not capable of being caring and empathetic, and this simply isn’t true.

Throughout my journey I have always believed that caring and empathy are not exclusively female characteristics, especially as more and more men are taking on a caring and hands-on fathering role within families with each generation that passes.

This is supported by many studies which show that patients see no difference in the quality of care given by female and male nursing personnel.

There is also the fact that men who nurse are promoted and hold many top positions within nursing, which is way out of proportion to the amount of men within the profession. So it’s certainly not the low paid vocation that some people still envisage.

Nursing is a dynamic, exciting, stressful, enjoyable, wonderful, fulfilling career and at the University of Plymouth we have helped to educate and prepare thousands of student nurses and midwifes over the past 25 years for the nursing and midwifery profession. We aim to ensure our nursing and midwifery cohorts replicate the diversity of our society, and are refreshing our marketing materials to reflect this. If looking at options after leaving school, or considering a career change in later life, I would genuinely encourage everyone to consider nursing.