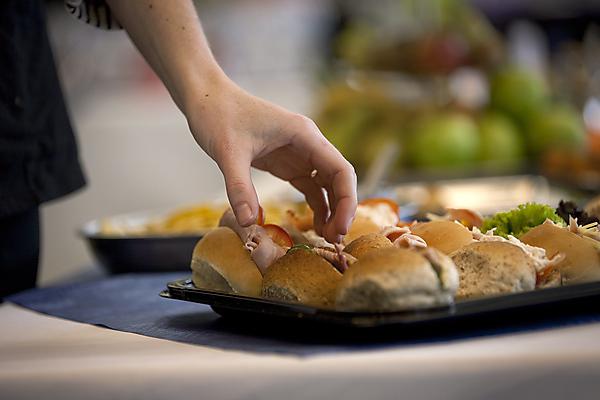 A new partnership involving University of Plymouth's Catering Services is set to provide food to some of the most vulnerable sections of the community.

The team, which runs the cafes on the city centre campus, has signed up to a programme run by the Devon and Cornwall Food Association (DCFA) that takes surplus food that would otherwise end up going to landfill and redistributes it to people in need.

“Ranking in the top ten for green credentials in the UI GreenMetric table for universities and in the top three of the People & Planet Green League, sustainability is at the heart of our operation,” said Ian. “Catering can be something of a ‘guessing game’ trying to pre-empt how many people will walk through the doors, and what this scheme will do is ensure nothing goes to waste.”

The food, which includes surplus, short-date and end-of-line stocks is collected from the campus twice a week, and after just two months, the University has donated £3,000 worth of stock, which equates to around 2000 portions of food and £1200 of equipment.

The ‘donation in kind’ service set up in Plymouth four years ago to make food available and affordable to all, collects from producers, manufacturers and retailers as Jackie Young, Executive Administrator of DCFA explains:

“Under the theme of ‘spare food is shared food’ we have been able to use the supplies from the University to contribute to cooked meals or food parcels for the homeless, church groups and people on the breadline. With levels of food poverty continually causing concern, the project has provided a very successful solution and DCFA now has hubs in both Exeter and Cornwall, allowing more stock to be distributed across the counties to where it is most needed. As the scheme continues to grow and attract more suppliers, we are always keen to welcome aboard new volunteers to help with collections.”

“We make every effort to provide ethically sourced and locally produced foods, so as well as doing our bit to protect the environment, we are helping to educate the people who receive these donations that you don’t have to go too far to get good quality food.”

The University has recently been named a ‘Three Star Sustainability Champion’ by the Sustainable Restaurant Association, received a Good Egg Award, presented by Compassion in World Farming in recognition of sourcing only cage-free eggs, a Food For Life Bronze Award for the second year in a row for preparing our food fresh and on-site, and Fairtrade Status, in support of fair conditions and prices for farmers and workers in developing countries.

It has also been shortlisted for the very first Freefrom Eating Out Awards. Winners of this national competition, run by Food Matters Live, will be revealed at a special ceremony at London’s Docklands in November.