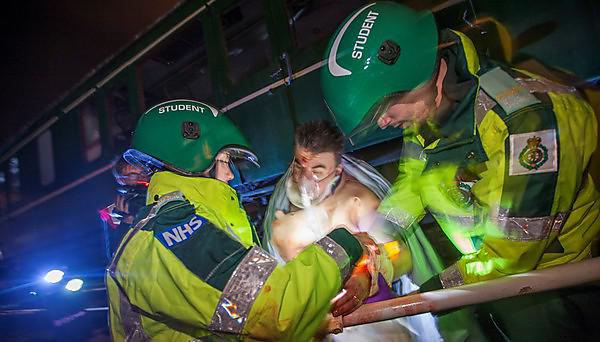 Paramedic students have put their skills to an explosive test by attending to casualties in a simulated train crash.

Twenty-nine students from University of Plymouth took part in the crisis exercise at Churston railway station, which was organised by Dartmouth Steam Railway and Riverboat Company in conjunction with Torbay Hospital, Devon and Somerset Fire and Rescue Service and Devon and Cornwall Police.

The exercise took several hours, during which the students had to negotiate unfamiliar surroundings, mostly in the dark, and successfully attend to all of the casualties using the skills they had acquired throughout their degree course.

The paramedic practice course at University of Plymouth is largely based on clinical skills, and programme leader Gary Strong explains why the exercise was so useful.

“Our students have to take part in hundreds of hours of placement throughout their degree,” he said. “And although we teach the theory and skills they need, nothing quite compares to going out and experiencing it. As a paramedic, you’re often the first one on scene and can be faced with any number of situations, some of which can be quite distressing. So having this simulated exercise really helped them with the physical, practical and mental preparation they need to excel in the profession.”

David Williams, a student in paramedic practice at University of Plymouth, said:

“There was a lot of screaming from the ‘casualties’ and the whole scenario was incredibly lifelike. We were put in teams of three to deal with the injuries and triaged a few people, which was great practice. It was definitely a useful exercise and I’m really pleased we had the opportunity to take part.”

Paramedic practice at University of Plymouth

Courses and study at University of Plymouth