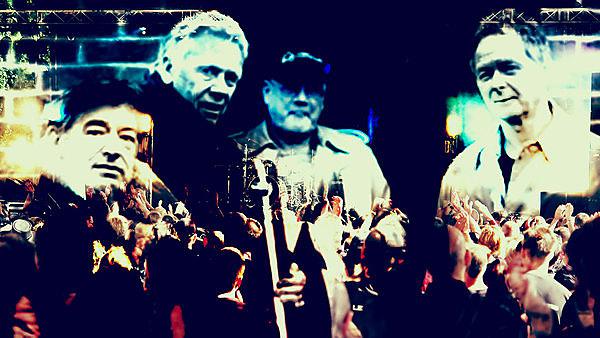 A band who have played with the greatest names in British music are coming to Plymouth University for a performance to celebrate the creative talents of the future.

US – comprising Herbie Flowers, Chris Spedding, Malcolm Mortimore and Derek Austin – will take to the stage in the Rolle Marquee on Thursday 18 June.

Their performance will be part of the celebrations for HOT’15 – the University’s art and design degree show – with ticket holders getting a private view of hundreds of student works.

The event is being delivered in partnership with Plymouth University and Children’s Hospice South West, with a raffle being held in support of the charity.

Herbie Flowers was a co-founder of Blue Mink, played on David Bowie’s Diamond Dogs album, and joined T Rex, also being a session bassist for Elton John, Lou Reed, Harry Neilson and Cat Stevens. He has also performed in Jeff Wayne’s tour of The War of the Worlds.

Chris Spedding had a solo hit with Motorbikin’ in 1975, and has played with everyone from Dusty Springfield, Jack Bruce, Elton John, Tom Waits, Joan Armatrading, Brian Eno and Roxy Music, and Paul McCartney. He also produced the Sex Pistols' first demo.

Drummer Malcolm Mortimore was a member of 70's progressive rock band Gentle Giant, and continues to tour as a member of The Three Friends. He has played with many other famous names including Mick Jagger, Tom Jones, and Tina Turner.

And Derek Austin is a prolific soundtrack composer for film and TV, who has worked as arranger and keyboard player for artists ranging from Frank Sinatra and Peggy Lee to Status Quo, Caravan, Peter Green and David Bowie. His film work includes The Empire Strikes Back.

HOT ’15 launches on Friday 12 June at a range of venues across the city, with high quality work from graduating Honours degree students being shown, sold, and commissioned.

Among the pieces on show will be works by graduates from 3D Design, Fine Art, Illustration, Media and TV Arts, Photography, Digital Media and Animation, Architecture, Graphic Communication with Typography, and Digital Art and Design.

This is a free event - please book your tickets at the Plymouth University estore.