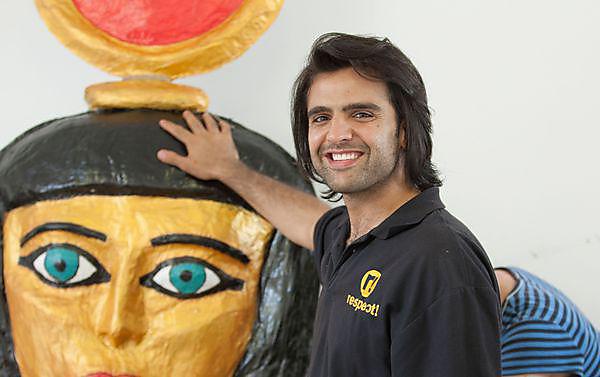 Racial equality leaders in Plymouth have hailed the work of a multilingual student who has been helping minority groups in the city with their computer literacy.

Saber Mamqaderi has been working with the Plymouth & Devon Racial Equality Council and Devon & Cornwall Refugee Support to deliver an IT course to people new to the region.

Saber booted up the course in November 2013, and has now attracted 50 attendees, including asylum seekers and refugees from countries as far afield as Kurdistan and Pakistan, as well as local residents and young people.

“Doing these sessions with people allows me to give back to a society that has enabled me to get to this level. I have done lots of volunteering as an interpreter due to my language abilities and I am familiar with the way that new people struggle in this society.”

The lessons, which are delivered at University,of Plymouth include essential IT skills, IT security, antivirus, use of social media and online tools. And for the more advanced, some sessions in internet programming are also available.

“I realised the biggest and most common problem is generally people’s limited knowledge about computers and the internet,” said Saber. “They often don’t know how to use email, they find it difficult filling in their applications for their living and many cannot even conduct a simple Google search! So I decided to use all my energy and skills to help everyone in our society gain essential computer skills.

“Running this course at University of Plymouth has had a great effect on their mentality about the educational and academic environment. Some of my students who had no interest in further education are now planning to take formal courses at City College Plymouth and even get into university to obtain higher education degrees. Seeing them motivated about their future and the improvements in their computer skills after the course makes me feel extremely happy and proud.”

Saber has welcomed the support of a volunteer from Devon and Cornwall Refugee Support Council (DCRS), Martin Uglow, who has been instrumental in bringing together service users from a variety of backgrounds, countries and abilities. Martin said:

“The workshops are very popular. Students have said the link with University of Plymouth makes it a more prestigious programme and has raised their own self-esteem.”

“The targeted education programme has proved to be vital in supporting people integrate into the community. We look forward to helping many more through our continued work with Saber.”

“Saber’s enthusiasm and passion are at the root of the success of the course. People using the facility said it has increased their confidence in their IT skills along with gaining familiarity with the University campus. One of Saber’s students who couldn't type his name in session one is now putting together his first webpage!”

The University continues to support Saber along with other partners, including Devon & Somerset Fire & Rescue Service.

The School of Engineering, Computing and Mathematics

The Devon and Cornwall Refugee Support