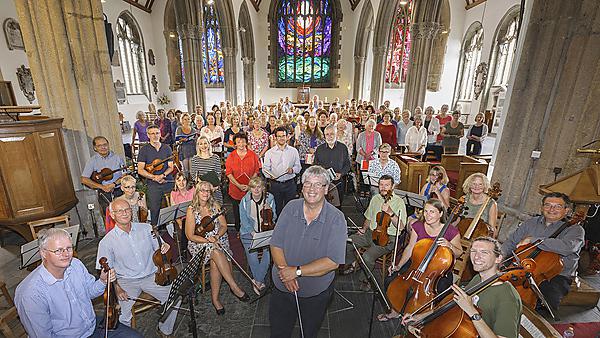 The performance was promoted by Peninsula Arts and given by the University of Plymouth Choral Society, together with aspiring and enthusiastic singers and musicians under the direction of conductor Simon Ible.

University of Plymouth's Faculty of Medicine and Dentistry is recognised as a world leader in research into low grade tumours of the brain and nervous system, which typically affect the young. The organisation was chosen as a Brain Tumour Research Centre of Excellence in March and the concert was the first large community fundraising event organised by the University for the charity since its selection.

In 2011, almost 500 people in the South West were diagnosed with brain tumours. The region has the highest rate of brain tumours diagnosed per million in England.

Sue Farrington Smith, Chief Executive of Brain Tumour Research, said: “I am delighted that the people of Plymouth have been so generous and our thanks go to University of Plymouth for providing us with this super fundraising and awareness raising opportunity. We are looking forward to doing more with people and organisations in the region, and this is a great start.”

Sue added: “Despite the advances in science and the growing opportunities for neurological investigation, brain tumours receive just one per cent of the national cancer research spend even though more children and adults under 40 die of a brain tumour than from any other cancer. We are urgently calling on people to help raise the funds needed to fund what researchers are calling ‘the last battle ground against cancer.”

Professor Oliver Hanemann, Associate Dean Research who leads the brain tumour research teams at University of Plymouth's Faculty of Medicine and Dentistry, commented: “My thanks go to colleagues who made this event such a great success, and to the audience who were so generous. We firmly believe that our work holds the key to better, more effective treatments for this type of brain tumour in the future and local support is vital to our success.”