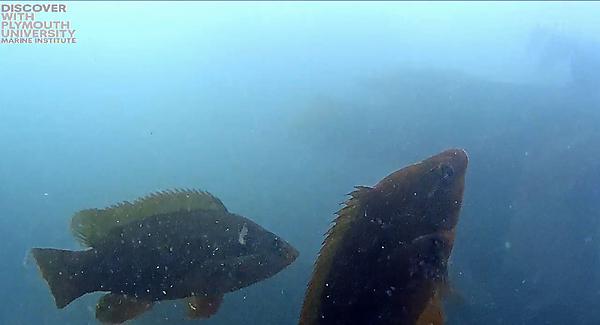 A marine scientist has installed what is thought to be the first underwater webcam in the country, providing a window into the biodiverse world of Plymouth Sound.

The Plymouth Underwater Teaching Observatory (PLUTO) has been installed by Dr Nicholas Higgs, of the Plymouth University Marine Institute, as a way of engaging schoolchildren and the general public with science.

The camera is located 30-metres off the coast at Plymouth Hoe and broadcasts live pictures from a depth of 5-metres, capturing video of marine life such as wrasse, gobies and pollack, as well as snails and crabs.

“Out of sight, out of mind is a perennial problem in marine conservation,” said Dr Higgs. “The PLUTO project aims to engage people with marine life in Plymouth Sound special area of conservation by providing an ‘eye in the sea’, accessible to anyone. Rather than bringing the sea into the lab, the PLUTO system takes the lab into the sea.”

The camera was installed by the University’s dive time, and wirelessly transmits images back to the campus where it is streamed live to the internet. The plan is to leave it there permanently, with intermittent services to keep the lens clean.

It will enable researchers to observe marine plants and animals in their natural environment in real time, monitoring their behaviour and response to man-made changes over time. There will also be some specific experiments using bait to attract a broader range of scavengers,

“The system will be able to record changes in the environment over multiple time scales, allowing biological rhythms and seasonal cycles to be studied. And schools will be able to join in with live experiments and work with scientists to learn about the local marine environment. In the current age of ‘citizen science’ the PLUTO platform will give members of the public the chance to help generate useful scientific data.”

The project is part of the Ocean City Festival, and there will also be a series of events and lectures to raise awareness about the state of the marine environment and the research being done at the University.

A link to the webcam

About the Ocean City Festival