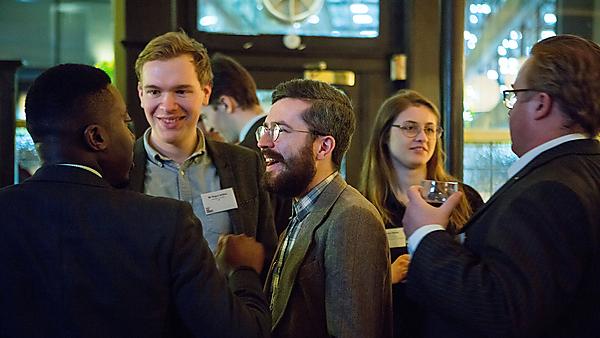 University of Plymouth graduates from across a variety of industry sectors have gathered together for a first ever alumni networking event in London.

From finance to the health professions, the sciences to the creative industries, alumni both recent and some years distant met up in the city’s business district to swap stories and contact details over social drinks.

“From the moment that I became involved with the board, I have been interested in the element of the lifelong journey of a Plymouth graduate. Your university life does not start and stop with your degree, and what I was keen to investigate was how we might develop a culture of inclusivity for the many graduates we have here in London from a diverse range of areas and backgrounds.”

Among the guests was Obioha Okwuonu, an International Relations graduate from 2015, who now works for Royal Bank of Scotland. He said:

“It’s important to me to be able to keep in touch with my university – but it’s simply not possible to get back to Plymouth to attend events. But holding gatherings here in London is a great way to meet fellow alumni and create new contacts. There were graduates from 2016 who were really keen to speak to those one or two years ahead of them, and find out how they are doing with their careers, and how they have settled into London life. I was also able to talk to several people about finance and give some advice on business accounts, and we exchanged contact details, which was great.”

With the creation of a specific London alumni committee, the University has set the wheels in motion for a number of other networking sessions.

Ruth Titmuss, former Students’ Union President, and now working in communications for an education-based charity, said she welcomed the creation of a new network:

“It was really great to feel part of a community again – something London lacks some of the time,”

she said of the get together.

“Not only was it great to reminisce about our time in Plymouth–and personally I really miss the city and the sea–but it was also a good opportunity to tap into some local knowledge about London. From talking to a number of Plymouth friends who also live here, I know there are plenty of people who are going to be involved in the future.”

“From my perspective, it was hugely successful,”

“We even had a graduate that knew nothing of the event walk in off the street as they were on their way to work. We were able to connect with them, and that sums up the spirit of the evening. In business, you never know where a simple conversation might lead to, and I think there were a number of inspiring examples of that.”

About the Alumni community at Plymouth