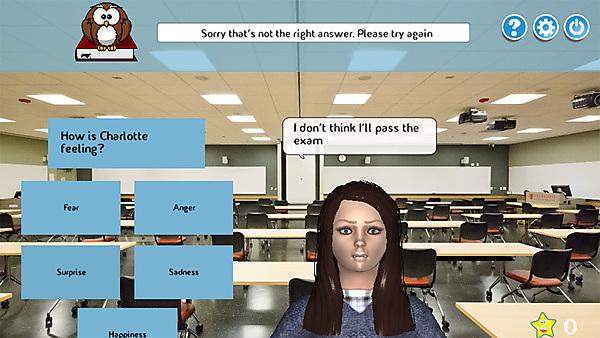 An interactive game which could enhance emotional awareness and regulation among young people has been developed by scientists from Plymouth University.

Emodiscovery is designed for children aged 8-12, and aims to assess their skills to regulate others’ emotions in a variety of situations.

It is being targeted at all children, but scientists hope it will enable them to compare the responses of those with conditions such as high functioning autism or Asperger’s Syndrome and ADHD.

“Emodiscovery could be a vital tool in assessing emotional intelligence and identifying whether children need support to improve it. By presenting them with a series of scenarios, and several potential courses of action, we can see how different children might respond to certain situations. But by providing explanations, we can also educate them in how to adapt their behaviour both for their benefit and for others around them.”

Dr López-Pérez received funding to develop the game from the Santander Universities Programme, which encourages staff and students to develop research and language exchange projects that will enhance future opportunities.

Initially consisting of six levels, and available in English and Spanish, Emodiscovery allows players to assume the role of a character who encounters differing emotional situations and has to identify the most appropriate response.

These include sentiments of happiness, sadness, anxiety and fear, and only by answering a series of multiple choice questions correctly are players allowed to proceed to the next level.

As well as encouraging children to test their own responses, and whether they might need further support, scientists plan to use the game to advance research and knowledge into children’s emotional intelligence.

Initially taking place in Spain, their research will assess the differing strategies children use to improve others’ feelings, and whether these alter depending on the emotional tone of the situation, or the child’s age or gender. Researchers aim to conduct this research in the UK in the near future as well.

It will also monitor whether children with ADHD and high functioning autism or Asperger’s Syndrome tend to use different techniques from children without any developmental delay.