In the summer of 1914, as the First World War began to rage across Western Europe, cadets of the Royal Navy were issued with a pocket-sized handbook.

It contained silhouettes of all warships in action across the globe, so the cadets would be able to recognise both friendly and enemy vessels on the high seas in the event they went to war.

Originally compiled by noted naval expert Fred T Jane, and published by Sampson Low, Marston & Co Ltd, the book includes the vessels of 35 international navies, including those of Britain, Germany, the United States and Japan.

Now, to mark the centenary of the outbreak of the First World War, Warships at a Glance has been reprinted by University of Plymouth Press as a tribute to the cadets and midshipmen – many of them just teenagers – who fought and died for their country.

“This special edition of Warships at a Glance gives a fascinating insight into the training offered to cadets at the time. For them, the prospect of war must have felt like an exciting opportunity to exchange the classroom for a life of adventure. The reality for their generation, however, was to be a life consumed by war, with many giving their lives for King and country at a mere 15 or 16 years of age.”

Among the first to receive copies of the book in 1914 were young cadets at the Britannia Royal Naval College in Dartmouth, and the reprint includes notes by one of them, Cadet Alec Lister Tidd.

Born in April 1900, he joined the college in January 1914, passing out at Christmas 1916 and being commissioned as a Midshipman aboard HMS Neptune. He was made a Sub Lieutenant on 15th November 1918 and witnessed the surrender of Germany’s High Seas Fleet seven days later.

His notes include records of British and German vessels lost during the conflict, featuring details of whether they had been mined or torpedoed.

More about Warships at a Glance

Originally compiled by noted naval expert Fred T Jane, and published by Sampson Low, Marston & Co Ltd, the book includes the vessels of 35 international navies, including those of Britain, Germany, the United States and Japan. 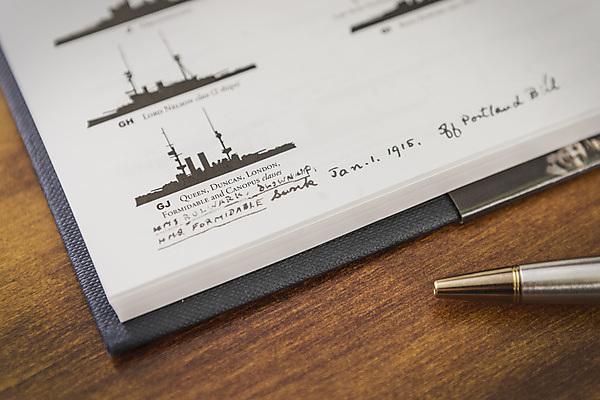 “The timely reproduction provides a historical snapshot of the state of the world’s navies at the peak of an era of unrivalled expansion and competition. In contrast to the military and political games being played out by the great powers of Europe the personal annotations on this edition, penned by Cadet Alec Tidd, highlight the reality that all wars are the stories of individuals as well as nations. Much has changed over the past century but our cadets’ ultimate purpose remains the same: to serve, fight and if necessary to die for their country and its cause.”

After the First World War, Alec Tidd continued to serve in the Royal Navy, joining the retired list in 1937. When the Second World War began, however, he rejoined and for three years served as Commander on board HMS Excellent before joining training establishments in Lancashire and then South Africa. He died in Taunton, Somerset, in 1984.

Warships at a Glance, published by University of Plymouth Press, is on sale now priced £15.99.

Buy Warships at a Glance on the Plymouth University estore