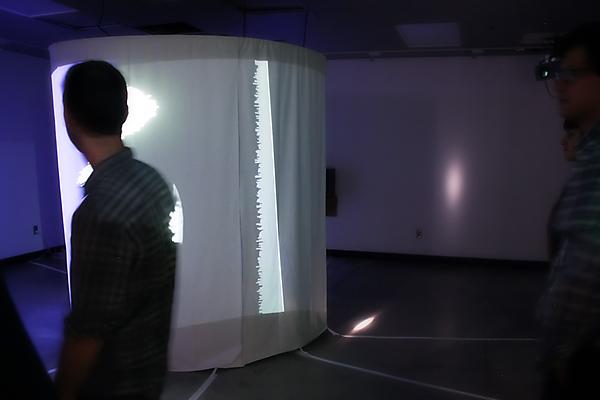 The progressive neurodegenerative disease, which affects nerve cells in the brain and the spinal cord, is presently receiving global attention thanks to the ALS ice bucket challenge, which in the past month has gone viral on social media.

But before that took the world by storm, researchers in the Interdisciplinary Centre for Computer Music Research at Plymouth University were already working on an audio visual installation based directly on scientific data which demonstrates the destructive impact the condition has on those affected by it.

Unfolding | Clusters is the result of a year-long collaboration led by PhD student Federico Visi and Dr Duncan Williams at Plymouth University, alongside scientists at UCLA (University of California, Los Angeles) and the University of Bologna.

“ALS is a hugely complex condition, and there are presently no identified causes or cures. While people around the world will now have heard of it, as a result of the ice bucket challenge, far fewer probably realise what it is. Being based directly on scientific data, Unfolding | Clusters enables people to see what is happening in front of their eyes, and is a great example of how the arts and science can combine to heighten public understanding.”

Unfolding | Clusters maps scientific data from ALS pathophysiology with musical notes representing each of the 154 amino acids contained with the proteins of brain cells.

The physical effect of ALS is to unfold these proteins and kill the cells so, to demonstrate that, while the installation begins by playing a pleasant melody it gradually becomes less ordered.

People can walk around a room which contains six speakers located around a core (designed to represent the central nervous system), designed in such a way so the death of the brain cells causes the soundscape of the room to shrink.

Federico Visi, who won a competition through Santander Universities to secure funding for the work, said:

“Everything people see and hear is based around how the amino acids – and therefore the proteins and brain cells – are actually affected by ALS. For example, the process of the protein unfolding is represented visually on the central core, and when a protein mutates there is a key change. The response to the piece so far has been hugely positive, and people have said it has made them think differently about the effects of this devastating condition.”

Unfolding | Clusters was premiered at an event in Los Angeles in June 2014, and will be demonstrated again at the SoniHED conference in York on September 12. It will then be installed at Plymouth University for the annual Peninsula Arts Contemporary Music Festival, running from February 27 to March 1, 2015.