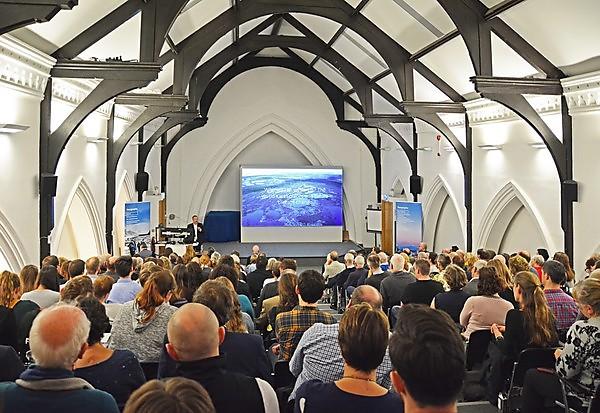 The University has celebrated the 50th anniversary of geography being taught as a degree subject at the institution.

At a special event on campus, academics past and present, students, alumni and members of the public joined together to pay tribute to the achievements of one of the University’s most respected scholarly communities.

Launched in 1969, initially as an external degree awarded by the University of London, geography as a subject has flourished at Plymouth with more than 5,000 graduating in the years since. It has also developed a world-class research culture, one that has spans smart transport to soil erosion, climate change to community resilience.

To celebrate the anniversary, Dan Charman, formerly Professor of Physical Geography at the University of Plymouth and now Pro-Vice Chancellor at the University of Exeter, provided a special guest lecture, showcasing the critical relevance of geographers’ work on a pressing global issue: ‘Whither the wetlands? The world’s wet places and future climate change’.

There was an exhibition of materials from the last 50 years, curated by Tim Absalom and Jamie Quinn of the Geomapping Unit. And there was also the launch of a new book – Challenges, Changes and Achievements – celebrating 50 years of geography at the University of Plymouth – written by Mark Brayshay, Emeritus Professor. It is understood to be the first book of its kind to trace the development of the subject at a modern university.

Professor Jon Shaw, one of the organisers of the event, a graduate of the degree and now a world-renowned researcher on transport, said:

“At a time when the world has never been in greater need of geographers and environmental scientists, it felt fitting to reflect upon how Plymouth has made such a powerful contribution to knowledge in this field. And as we look forward to the next 50 years, we are all motivated by the thought that it is the generations to come that will play such a key role in addressing these global challenges.”