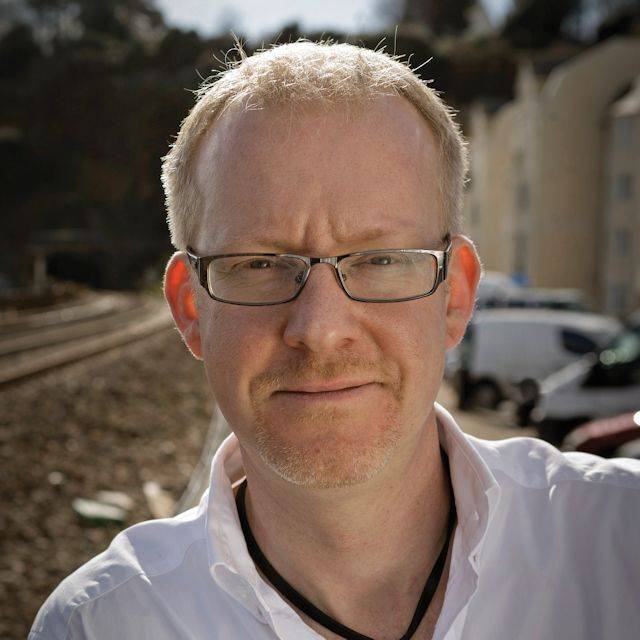 I am Associate Head (Resources) of the School of Geography, Earth and Environmental Sciences.

Although a fair proportion of my time is spent in this management role, I continue to teach classes and conduct research in my specialist field of transport, travel and mobility. This research ultimately ends up being published as books, academic journal articles and policy and / or consultancy reports. My latest book, Transport Matters, was published by Policy Press in October 2019.

I have a BSc (First Class Hons) in Geography, a PG Dip (Distinction) in Social Science Research and a PhD in Human Geography.

My academic career has come full circle: I started out in Plymouth as an undergraduate in 1992, before spells in the United States and Scotland (and shorter stays in Australia, Germany and New Zealand). I moved north to become a Lecturer in Geography at the University of Aberdeen, and stayed in the Granite City for seven years. I was promoted to Senior Lecturer in 2003 and was Head of Geography & Environment in 2005 and 2006. I returned to Plymouth in 2006 to take up a Readership in Human Geography and was promoted to Professor in 2008.

Throughout my career I have tried to fashion a profile as an 'all round' academic, engaging myself in research, teaching and administration in more or less equal measure. Thus in addition to writing books, journal articles and reports, I have developed a varied teaching portfolio and held numerous managerial roles including Research Group Leader, Research Centre Director, Head of Department and Associate Head of School.

In my career I have taught numerous aspects of human geography. Because my PhD focused on transport and travel issues, I have always been involved in teaching Transport Geography modules, but my time at the University of Idaho in the 1990s gave me a lifelong love of the American West. Over the years I've written classroom-based modules on the USA and set up a field trip to the Pacific North West, a variant of which in 2020 will be running for the 15th time. I also teach political and economic geography.

At the moment I teach on four undergraduate modules:

GGX1205 The Geographical Journey
In this module we aim to address the fundamental questions, what is geography? And why is it important? In its simplest form, I suppose, geography is the study of where things are, why they're there, and what they mean. We use a variety of local, national and global examples to introduce students to key themes and debates in contemporary human and physical geography.
GGH1202 Changing Places
This is a wide-ranging module which exposes students to a variety of topics studied by geographers and the different ways we go about studying them. I teach the political and economic geography sections of the module, dealing with ideas of states, nations, territory, governance and state restructuring, electoral geography, firms, labour and world trade.
GGH2204 Transport, Travel and Mobility
This is the module in which I get to focus on my specialist research area. The basic points I'm trying to get across are that: a) modern transport technology and the mobility it affords are splendid, but the way we go about consuming this mobility imposes social, economic and environmental costs on society that we don't need to impose on ourselves; and b) that geographers are ideally placed to help square the circle of making our current transport trends less costly and more sustainable. I introduce and assess the main components of what we might call the 'transport debate' and then use the idea of the journey to promote critical thinking about our travel trends and experiences, and the impacts of these. All students have to make and report on their own journeys, and relate these to key issues in the transport debate.
GGX3201 Advanced Fieldwork in Geography: The Changing American West
The result of having lived in the USA and developing many professional contacts and friendships across the Pond, this module involves between 20 and 40 students boarding a plane to Seattle to experience and learn about the Pacific Northwest for 11 days. We split the trip into two parts: the first week involves students investigating a different geographic theme each day (for example, we investigate 'conflict' in the deserts and mountains around Richland, Washington, and 'society and nature' in the Columbia River Gorge). In the second half of the trip students divide into groups of 4-5 and undertake a project of their own design.

My research mainly focuses upon the geographical implications of mobility / accessibility, and issues to do with transport and governance. Together with colleagues at Erfurt University of Applied Sciences in Germany, I recently completed a project on Transport Needs in an Ageing Society - the so-called 'TRACY' project (all European Union-funded projects have increasingly jaunty and progressively tangential acronyms). At the other end of the spectrum I've also of late been involved with work on jogging and the mobility experiences of people with disabilities.

In my career I've been involved in research into all manner of things to do with transport, travel and mobility. I started out in the 1990s with a project on the privatisation of British Rail, in which I got to interview key politicians and civil servants involved with the controversial policy. 'Getting my hands dirty' in research terms has always been one of my favourite aspects of my job, but sadly as I have become more senior (both in years and professionally) I have found that opportunities to actually go out and do my own research have become fewer and further between. In an attempt to put this right, together with Iain Docherty (Stirling) and Danny MacKinnon (Newcastle) I embarked upon a project about the impact of devolution on UK transport policy in which we deliberately involved no research assistants 'in the field'; getting to interview the main protagonists in this area was fascinating and we wrote up the results as a book for Elsevier Science, Diverging Mobilities. A second, extended and fullyupdated version of this book, Governing Mobilities, will be published by Edward Elgar once we've finished the necessary research, this time with our colleague David Waite (Glasgow).
One of the other aims of the devolution project was to bring together two usually completely separate areas of literature, namely those of political geography and transport geography. In another book with Iain Docherty (The Transport Debate, published by Policy Press) I sought to do this again, this time attempting to pull together the work of transport geographers and transport studies specialists with that written by scholars working in the sociologically-inspired 'new mobilities paradigm'. The book was designed to introduce key ideas and concerns of transport and mobilities scholars through the lens of a series of familiar journeys (the commute, the school run, the holiday, etc.) made by a fictitious Anglo-Scottish family, the Smiths.
My latest book, Transport Matters, was published by Policy Press in 2019. Co-edited with Iain Docherty, it brings together 27 leading scholars in the transport and mobilities fields, and demonstrates the importance of transport as a means of achieving a whole range of different government policy goals from economic development to health and wellbeing.
Indeed, a common thread to my work has been transport policy - its impacts, complexities and appropriateness and, in British terms at least, the extent to which it is fit for purpose. I have recently been able to play a small part in influencing transport policy thanks to a project with Dr Andrew Seedhouse of Smart Applications Management, which was judged by the REF 2014 panel to constitute a 4* Impact Case Study. We obtained more than £4m of government funding to help roll out the nationwide introduction of 'smart' ticketing as a means of making bus transport more appealing. This is particularly difficult in provincial Britain because of the deregulated structure of the bus sector outside of London.

Shaw, J and the South West Smartcard Forum (2009) £40,000 from the South West Regional Improvement and Efficiency Partnership Enterprise Fund for the project Delivery framework for the introduction of a shared, regional, open access Smartcard Back Office System.

Docherty, I; Shaw, J; Preston J and others (2008) £73,800 from Strathclyde Partnership for Transport for the project High speed ground transport – Glasgow-Edinburgh corridor.

Shaw, J; Gray, D and Yarwood, R (2008) £5,430 from the Commission for Rural Communities for the project Transport futures: the potential impacts of road pricing on rural areas.

I acted as the Specialist Adviser to the Transport Select Committee of the House of Commons for its inquiry into the major road network; I am a member of the Great Western Railway Stakeholder Advisory Board; I am the Deputy Chair of the European Platform for Transport Sciences; and I chair the Scientific Advisory Board of econex verkehrsconsult. I am also an Ambassador for the City of Erfurt - it's a splendid place, and I highly recommend a visit!

I was the winner of the 2018 Alan Hay Award for Significant Contributions to Transport Geography, and the joint winner (with Iain Docherty) of the 2006 Scottish Transport Award in the category of Young Transport Professional / Researcher.

I have acted as a referee for the ESRC, the British Council, the British Academy, the Leverhulme Trust, the European Union and for all major geography and transport journals.