A graduate who turned his back on a career in professional football and has become an award-winning environmental scientist has been honoured for his contribution to the field of chemistry.

Dr Charles West was once on the books of Hereford United before going back into the world of academia when he enrolled at Plymouth University in his early 20s.

He has since earned numerous accolades – including the Scopus Young Researcher UK Award for 2013 and being invited to join the judging panel of the Observer Ethical Awards 2014 – and has now been named as one of the Royal Society of Chemistry’s “175 Faces of Chemistry”.

The project is part of the build-up to the Society’s 175th anniversary in February 2016, with 175 ‘faces’ being selected as ambassadors and role models for future generations.

“There have been tens of thousands of chemists who have had a real impact on how we go about our daily lives, so to be named as one of the RSC’s ambassadors is a real honour. Chemistry has always been one of my true passions and I am lucky enough that, thanks to Plymouth University and its reputation as a global leader in the field, I am able to pursue a career which offers me opportunities I could never really have imagined.” 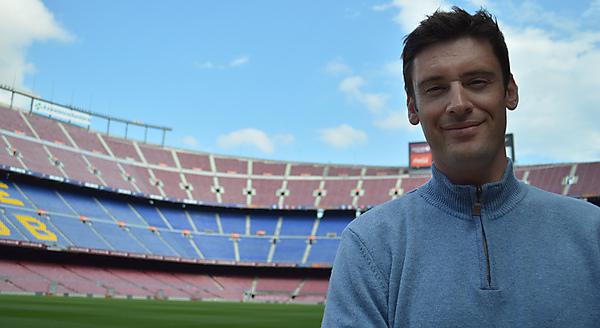 Dr West, who starts work later this month as an organic geochemist with oil giant Saudi Aramco, began his association with Plymouth University in 1999, when he enrolled for a BSc (Hons) in Analytical Chemistry, during which he earned a number of accolades.

He then completed his PhD in Environmental Organic Chemistry, subsequently working under Professor Steve Rowland in the University’s Biogeochemistry Research Centre, specialising in the development and application of novel analytical techniques, in particular to investigate persistent, unresolved and unidentified complex mixtures of organic chemicals present in the environment.

The RSC’s 175 Faces of Chemistry initiative is the central strand to a series of activities aimed at highlighting and celebrating the diversity of the individuals, both past and present, who have helped to shape chemistry and science as a whole.

All 175 ambassadors will be profiled on the Society’s website, with those already featured including world-renowned scientists and Nobel prize winners, including Marie Curie, Michael Faraday and Alexander Borodin, John Cornforth and Dorothy Hodgkin.

“To see your name listed alongside some of the great pioneers of chemistry is quite humbling as their achievements are known the world over. By contrast, my path into it has been far from conventional, but it is amazing to think I could potentially inspire the next generation of chemists and encourage people to consider it as a future career.”