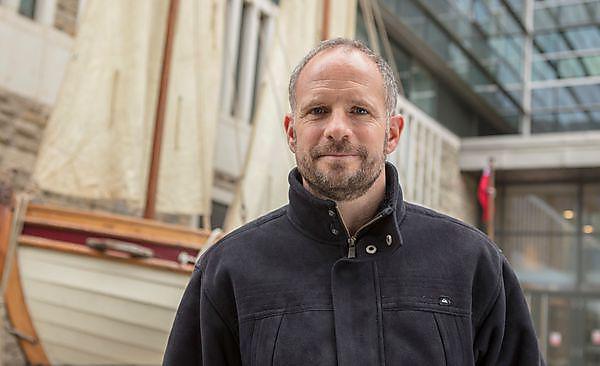 British yachtsman Conrad Humphreys has taken to the stage to provide a remarkable behind the scenes account of how he and eight other men were able to complete a gruelling recreation of arguably the most remarkable survival story in maritime history.

At the University of Plymouth’s Marine Institute spring public lecture, last night, Conrad revealed to an all-ticket audience how the 4,000 mile Pacific voyage, mirroring the path of Captain William Bligh’s boat in 1789, had been “an audacious and reckless trip” and one the greatest challenges of his professional career.

Conrad, and eight companions – led by SAS: Who Dares Wins frontman, Anthony Middleton – endured sickness, injury and near-starvation in the course of filming the documentary, Mutiny, which was broadcast over five weeks by Channel 4.

The 23-foot open keel-less boat, a replica of the one that Bligh and his men were cast adrift in following the mutiny on HMS Bounty, was also in attendance, stationed outside the Sherwell Building on the University campus.

Conrad, who has an Ocean Science degree from the University, said:

“This was a modern-day recreation with a cast of people that you would not normally expect on a challenge of this magnitude. My job was to navigate and support Captain Ant, to make sure we kept on course and arrived safely in Timor. This wasn’t easy – and when we arrived at the start in Tonga and met all together for the first time, I realised how big a challenge this would be. Looking back at those early sailing days, it was clear just how audacious and reckless this trip was. Bligh’s men were left for dead and no-one expected them to survive. Most of his crew died within weeks of arriving in Timor.”

Entitled Mutiny: Recreating Captain Bligh's epic voyage of survival, the 60-minute lecture and Q&A enabled Conrad to share some of his personal reflections on the project and reveal how he had genuine concerns for the long-term safety of the crew due to the effects of dehydration.

During the course of the 60-day sailing, the team were left with only traditional navigation equipment and had only the same meagre rations as Bligh, from the moment they set off from the start point, 35 miles to the south of the island of Tofua, near the Kingdom of Tonga.

As the professional skipper, Conrad was responsible for navigating and sailing them ‘safely’ across the Pacific Ocean, through dangerous reefs, some atrocious weather, and the dreaded doldrums. A three-time circumnavigator of the world, including the notorious Vendee Globe in 2004, Conrad said:

“What surprised me most was the distance that you can cover in such a small open boat. History is littered with survival stories of people spending long periods adrift at sea, but we sailed the equivalent distance from the UK to Brazil in a boat that the MCA coded for being no more than three miles from a safe haven and in daylight only! That’s over 4,000 miles, and this tiny boat survived everything the sea threw at her. When we arrived in Timor, the relief for the guys was enormous and tears rolled down everyone’s cheeks. I remember looking back at this little wooden boat thinking ‘bloody hell – she’s only gone and got us here!’.”

Conrad will now be sharing his experiences at two further lectures in London. He is also working with the Island Trust to ensure that the boat is preserved and used for educational purposes, as part of their mission to provide life-changing sailing experiences for disadvantaged and disabled young people.

Dr Nicholas Higgs, Deputy Director of the Marine Institute, and host for the evening, said:

“As a successful graduate, Conrad is an outstanding ambassador for the University of Plymouth’s marine and maritime excellence. We were therefore delighted that he was able to deliver this year’s Marine Institute spring public lecture and provide inspiration for the next generation of marine professionals.”

About Conrad Humphreys (a link to his external website)