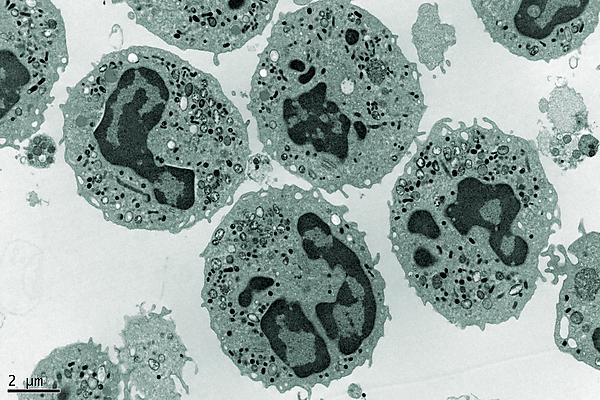 Professor Simon Rule, Professor in Haematology at Plymouth University Peninsula Schools of Medicine and Dentistry and Consultant Haematologist at Plymouth Hospitals NHS Trust, has been awarded a significant grant by Cancer Research UK to carry out a research study into the treatment of older patients with mantle cell lymphoma.

The award, which is in the region of £600,000 and will be split over 90 months, will enable Professor Rule to lead a national research study to look at and compare the efficacy and side effects of using a BTK (Bruton’s Tyrosine Kinase) inhibiting drug in a trial against standard chemotherapy.

The first patients will join the clinical trials in summer 2015.

Current therapies, such as chemotherapy, intensive chemo-immunotherapy (chemotherapy combined with immunotherapy) or stem cell transplant are effective but due to the aggressive nature of these cancers, patients always relapse and eventually run out of options.

These new drugs work by inhibiting Bruton’s tyrosine kinase (BTK), a protein which plays a role in the signals that cause growth in cancerous cells. Blocking this causes the cancerous cells to die but normal cells are unaffected.

Newly diagnosed patients who take part in this Phase 2 trial will either be treated with standard chemotherapy, alongside a commonly used drug that is given in combination with chemotherapy, Rituximab, or they will be given the BTK drug Ibrutinib and Rituximab.

Professor Rule, who led the first worldwide study of its kind into a new class of BTK inhibiting drugs at Derriford Hospital in Plymouth, describes how this will be a randomised trial to see the differences for patients who have chemotherapy first against those who have the drugs.

“We’ve been talking about chemo-free treatment for years and now thanks to the grant from Cancer Research UK it might now be a reality. Studies like these have the very real prospect of changing the management of these difficult forms of cancer.

“These drugs are transformational and the astonishing thing about them is that they have virtually no side effects, which is unprecedented in my experience. In some patients the effects are immediate. Patients with lots of symptoms, particularly those with lymphoma, will feel better the next day after taking the medication.

“This is the only study of its kind in which patients who are newly diagnosed with mantle cell lymphoma will be offered a first line treatment for this disease that does not include a form of chemotherapy. At the moment we do not know which treatment will be better and the only way to find out is by designing research studies to collect information about what happens to patients and their mantle cell lymphoma.”

A total of 400 patients will be studied from many hospitals in the UK. 200 of these will receive Ibrutinib with Rituximab and the other 200 will receive chemotherapy with Rituximab. Depending on the patient’s response to their treatment they might only stay in the study for a few weeks, whereas others may remain in the study for a number of years.

“The UK is at the forefront of this drug development and all of the studies into these new drugs are being run from Plymouth. This will completely change the way we manage these diseases. We have access to the next generation of the drug to be part of the next trial phases. This is not a cure for cancer but it will mean we are significantly improving our patients’ life expectancy and quality of life; similar to managing a chronic condition. I have yet to come across another class of drugs in my career that has been so successful for leukaemia or lymphoma.”

“The Lymphoma Association wants everyone affected by lymphoma to have the best possible treatment and care. This is an exciting study with the potential to make a huge difference to lymphoma patients and we welcome it.”

With an average survival rate of four to five years, the new developments in BTK inhibiting drugs could dramatically improve the life expectancy and quality of life for patients with terminal forms of leukaemia and lymphoma who have run out of other treatment options.

The trial will begin in January 2015.