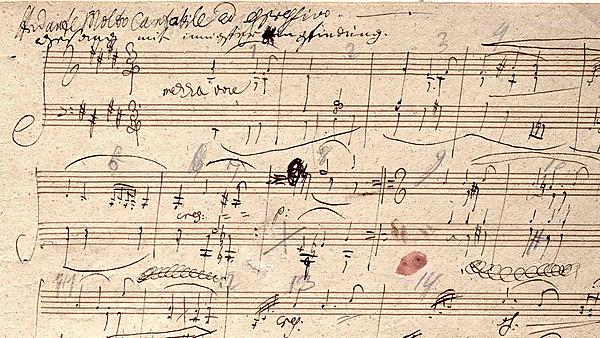 The 250th birthday of one of history’s greatest music composers will provide the backdrop for a special Christmas lecture at the University of Plymouth.

Dr Robert Taub, Director of Music at The Arts Institute, and historian Professor James Daybell will be transporting a virtual audience to Beethoven's era to explore the musical and social context of several of his most pivotal compositions.

Over the course of the event, the two academics will reveal how research into the musical sketches Beethoven produced and cherished throughout his life can lead to a greater understanding of the creative evolution of his art.

The inaugural Christmas lecture for the University’s Public Research Programme will see Dr Taub perform live musical excerpts from across Beethoven’s career on a Steinway piano. He and Professor Daybell will then discuss the broader context of history and art in the period.

It is easy for modern audiences to forget that, for several centuries, music from artists like Beethoven was not available on demand – whether radio, television, CDs or streaming,”

“If you wanted to hear music, you either played it yourself or attended a live performance. In conversation with James, we’re going to consider how Beethoven’s life and his art were intertwined and how he always strove to imbue musical communication with as much meaning as possible, meaning that can affect us all today.”

Robert first performed the entire cycle of 32 Beethoven Piano Sonatas at Princeton’s Institute for Advanced Study, where he was Artist-in-Residence. He has subsequently performed the cycle in venues such as New York and Hampton Court Palace, written a book – Playing Beethoven Piano and Sonatas – and released several commercial recordings of the complete set.

“The Beethoven Piano Sonatas continue to be an inspiring and driving force - both as individual works of art and collectively as an astonishing spectrum of creative expression,”

“I feel privileged to be able to share these magnificent works through my performances and recordings and through my book and the performance edition that I’ve prepared. All are informed by a lifetime of academic research into the creative evolution of these works by examination of Beethoven’s sketches, his musical autograph scores, and his many letters, in addition to research on the ways in which Beethoven and his music were in the vanguard of the technological development of the piano.”

The event – on the 16 December – will be staged in the Sherwell Building and will be live-streamed to an online audience who will have the opportunity to submit questions for Robert and James. It will also include an introduction from Professor Judith Petts CBE, Vice-Chancellor of the University.

“As a historian I’m interested in understanding the man behind the music, in seeking to unlock his personality, character, motivations and practices as a composer. And then there is the historical context to Beethoven – the influences upon his composing, which happened at a very heady and disruptive time in Europe, in the aftermath of the French Revolution and the height of the Napoleonic Wars.”

‘Tickets’ to Beethoven's private legacy: his musical sketches are available to all and can be booked via our events page. A link to the event will then be sent to once the booking is complete.