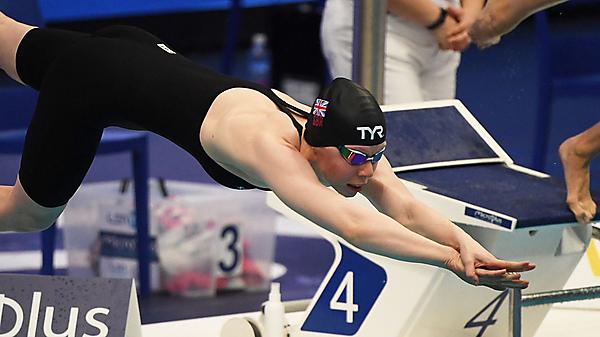 Laura Stephens, a butterfly specialist, was confirmed in the 30-strong squad after a remarkable few days during which she was first part of the Women’s 4x100m Medley Relay team that won gold in the European Aquatics Championships – setting a competition record in the process.

She then swam a personal best in a 200m heat in Glasgow, and achieved the Olympic consideration time in winning the final – grasping her last opportunity to reach the mark.

“Qualifying for the Olympics has been my goal since I started swimming,” says Laura, who started swimming at the age of nine. “It is the result of 11 years of hard work, dedication and sacrifice to get my place on the team. There have been so many ups and downs on my journey. It is really difficult to express the excitement, gratitude and relief I feel in qualifying for Tokyo 2020, but I can’t wait for the games to start and to represent Team GB at the highest level of sport, I feel extremely proud.”

Originally from Colchester, Laura moved with her family to Plymouth when she was 14 so that she could join Plymouth Leander. After completing her schooling, she enrolled on the BSc (Hons) Architectural Engineering degree, in the University’s School of Art, Design and Architecture.

With 25 hours per week spent training in the pool, plus five hours in the gym, and additional physiotherapy and sports psychology sessions, the competing demands on Laura’s time have required careful management. But with the support of staff at the University, as well as friends and family, she’s succeeding on all fronts.

“I feel very lucky to have received such amazing support from the University, especially my course leader Alba Fuertes and tutor Rory Jones, who have been extremely understanding of my unique situation,” says Laura. “Staying organised and self-disciplined to not fall behind on my deadlines has been very important for me, and although I can admit there have been one or two late-night library sessions, overall, I have really enjoyed the challenge. I would like to have a career outside of swimming in the future, so that when I retire from sport I can start fresh on something new hopefully in the architecture/construction industry.”

Laura will join up with the British team next month for the rescheduled games, which are set to run from the 23 July to 8 August, following their postponement in 2020 due to the pandemic. Swimming forms the second largest element of the Olympics, with 35 events. All of them, bar the open water swims, will be held in the brand new 15,000 seater Tokyo Aquatics Centre.

“I’ve had the best support staff that I could have around me, my family and friends have been there for me since day one,” Laura says. “They have believed in me, and that is the meaning behind being able to put that kit on and say ‘I’m an Olympian for Team GB’.”

“We are extremely proud of Laura’s achievement of being selected for Team GB at this summer’s Olympic Games in Tokyo. As her personal tutor and a lecturer on her architectural engineering degree, I know how hard she has worked to achieve her goal of not only qualifying for the Olympics, but also achieving excellent grades throughout her degree over the last four years. We wish her all the best for the games.”

Architectural engineering with the University of Plymouth

Learn how to design and build the buildings of the future.