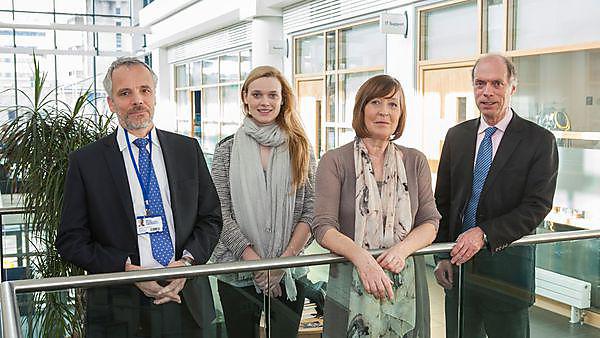 A Penzance man who was a champion for better health care in Cornwall, has left a legacy of £100,000 in his will to support world-leading research into brain tumours at Plymouth University. His bequest comes during national Brain Tumour Awareness Month.

Richard Somerville chose Penzance as his home for his later retirement. His career as a health statistician saw him run the Medical Statistics Unit within the Medical Statistics Division of the Office of Population Censuses and Surveys (now the Office for National Statistics). The Unit provided support to medical specialists and undertook special statistical projects. It also liaised with government departments and dealt with requests from academia and the wider public for medical statistics and data, advising on their interpretation.

Richard also dealt with Parliamentary Questions, a very pressurised area of work as MPs' questions usually had to be answered very quickly and could be awkward to handle as often there was no clear-cut response.

His move to Cornwall came after his parents died, and he became a well-known campaigner for better health care in the county through his work with West Cornwall HealthWatch. He used his extensive medical and statistical knowledge to analyse policy documents from NHS organisations and often pointed out the flaws in the statistics presented. He was especially concerned about the contracting-out of NHS services to independent providers, and his attacks on what he saw as injustices were relentless.

Towards the end of 2013, Richard was diagnosed with an aggressive grade IV glioblastoma multiforme (GBM) brain tumour, to which he succumbed 18 months later at the age of 69.

His sister and niece, Diana and Stephanie Jackson, recently visited Plymouth University to present Richard’s legacy and to hear the news that the University had offered to name laboratory space after Richard in its new health and biomedical research centre, the Derriford Research Facility.

“Richard wanted to make a donation directly to research into brain tumours where his input would have the most impact. He heard about the work being carried out at Plymouth University on BBC Radio 4 and was struck by the close working relationship between Plymouth research teams and clinical colleagues at Derriford Hospital – he was a long term advocate of this sort of research/clinical collaboration that makes a direct difference to people’s lives and which ties researchers and practitioners closer together. In brain tumour research at Plymouth University he saw a place for his legacy that would achieve all this, and he would have hoped that others would also see the potential of funding research at their own, local university.”

“Richard was a staunch supporter of the NHS in Cornwall and was grateful for the excellent care he received at Derriford and Treliske Hospitals and his local West Cornwall hospital. Although he thought his own care was impeccable and could not be improved upon, Richard was always very knowledgeable of funding issues within the NHS in other areas and championed for greater awareness of this.”

The brain tumour research team in Plymouth, one of four Research Centres of Excellence supported by charity Brain Tumour Research, are focusing on identifying and understanding the mechanism that makes a cell become cancerous. They are exploring ways in which to halt or reverse that mechanism. An innovation will be testing new drugs in human primary cell cultures leading to innovative phase 0 trials. It is hoped this will be followed by adaptive phase II/III trials with the potential for making drug therapies available to patients safely and more quickly.

The team is led by Professor Oliver Hanemann, Associate Dean Research at Plymouth University Peninsula Schools of Medicine and Dentistry. He commented:

“We are extraordinarily grateful to the memory of Richard Somerville and his family for this generous donation to our work. It is clear that Richard really ‘got’ not just our research but also the way in which we go about it.”

“Our research is funded via a number of routes including income from the government, charities, research grant-funding bodies and, importantly, direct donations from individuals, groups and businesses. The latter gives donors the ideal opportunity to support research that is specific to their interests and, for those living in the South West, the chance to back research taking place in their area. As a University we are always happy to offer our support to those who wish to support us – we see it as a two-way relationship.”

If you would like to support research at Plymouth University, please visit www.plymouth.ac.uk/campaign, email campaign@plymouth.ac.uk or call +44 1752 588045. Your support can make all the difference.

The charity Brain Tumour Research is dedicated to increasing funding for research, bringing more hope to brain tumour patients and those close to them.