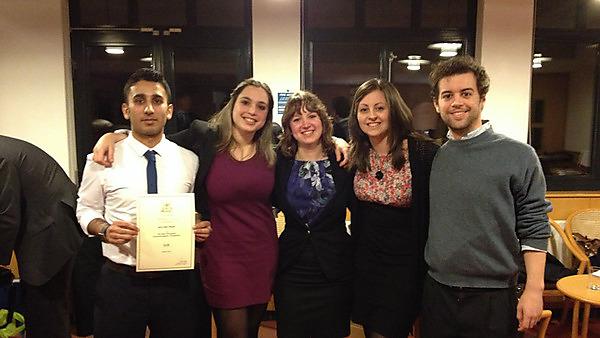 Nicola Robins at the East of England ICE Communications competition

"I worked in the Highways team, which included highway design and liaison with Statutory Undertakers. This involved contacting the companies to ask if they had any infrastructure in the area and, if so, meetings with how these could either be diverted or protected for the project to continue. I was based with the structures team for a couple of weeks, designing a culvert and helping with basement inspections, recording the current condition of each one before the local council started working on the highway above. I also worked for two weeks in the ports and marine department helping to design a water channel and berthing and fender design for the new marina that was being designed. What I really enjoyed was being able to go out on site visits and attend meetings, allowing me to see every aspect of the projects we were working on.

One of the highlights of the placement was when the other graduates and I entered the East of England ICE Communications competition and came second. As well as this, the office as whole was very friendly and there were many social events organised between employees that helped with settling into the office and getting to know everyone. It was particularly rewarding when I was told by the Senior Structural Engineer that the culvert I had designed had been constructed on site! I was also nominated for an 'employee of the quarter' award by another employee, which I was very grateful for and showed that my efforts were appreciated, even if I didn't always fully understand all the aspects of a project.

The pay was reasonable and seemed to be the average of others I knew on placements. I was able to save in the year and this has meant that coming back to university I haven't needed a part-time job as I did in my first two years of study.

At the end of the placement, AECOM offered me sponsorship and a summer placement in a department of my own choosing. I’ll be doing the placement this summer which is intended to lead on to a graduate job with the organisation. My placement year has helped to increase my confidence in talking to people I don't know and also with presentation skills. I have found the work experience has helped with subjects this year as some of the things I worked on last year were new to me but have been covered throughout the third year.

Completing my placement has confirmed to me that I would like to work within the coastal and ports and marine engineering aspects of the discipline and will be completing a workshop in France that specifically covers coastal engineering and port and marine design."