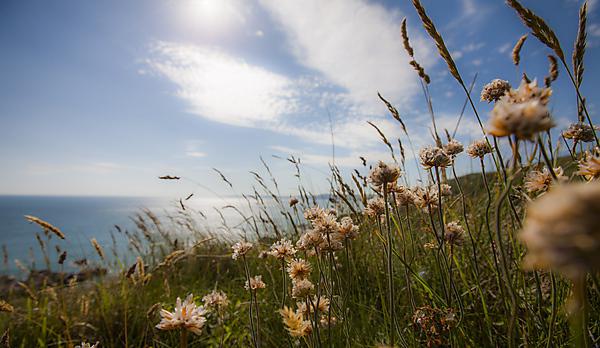 “How inappropriate to call this planet 'Earth', when it is clearly 'Ocean',” said the British science fiction author and inventor Arthur C. Clarke. It is a quote that invariably springs to mind whenever I’m asked about the importance of the marine environment.

Did you know, for example, that phytoplankton produces half of the world’s oxygen? So, one out of every two breaths of oxygen we take originates in the sea. And on the theme of breathing, our oceans remove huge amounts of carbon dioxide from the atmosphere, sinking carbon into the depths. Our fish are a fundamental food source, and our seas play a defining role in shaping our climate and weather. Oh, and global trade is almost entirely dependent upon maritime movement.

Despite its importance however, we know very little about the marine world compared to our understanding of the terrestrial one. Maybe that is intrinsic to the fascination we feel for it, and why people like me become marine scientists. And the UK’s marine environment is truly extraordinary. It might not feature regularly on programmes such as Blue Planet – presumably because producers think viewers would rather see more exciting and exotic locations – but our coastal waters are remarkable. And I say this as someone who learned to dive in Florida while studying at the University of Miami. The first time I dived in Plymouth Sound, I was stunned. I had never seen kelp underwater before; it was like swimming through a forest. At that moment, I realised why so many people come to dive in the waters around this city – and why we need to protect them.

Until very recently, the over-arching responsibility for creating and enforcing the legislation relating to the protection of our domestic and continental marine ecosystems has resided with the European Union. Through legislation such as the Marine Strategy Framework Directive (MSFD) and the Common Fisheries Policy, the EU has enshrined a holistic, whole environment approach that balances commercial activity and interests with environmental protection and sustainable use.

Sitting behind this legislation is body of scientific research. What many people might not know is that the UK has played a leading role in a number of marine management organisations, including the International Council for the Exploration of the Sea and the Convention for the Protection of the Marine Environment of the North-East Atlantic (OSPAR) – and these have greatly influenced the European science-policy landscape. In stark contrast to the stereotype of ‘Brussels says this and Brussels says that’, the EU listens to and works with scientists to ensure that its policies are ecologically meaningful.

I have led the UK’s and OSPAR’s implementations of the MSFD for pelagic habitats (the body of water classed as the ‘open ocean’), and have spent a number of years working alongside and with colleagues in Europe. It’s been an extraordinary achievement to bring 28 countries together in this way, especially when you consider that elsewhere in the world marine management rarely extends across country boundaries. This was emphasised when I gave a talk at a conference in Japan, last year, which brought together the hosts, South Korea, China, Russia, America and Canada to consider issues relating to the Pacific Ocean. At the end, the delegates had so many questions; they were impressed that we operated in an environment where scientific evidence so strongly influences decisions about our marine environment.

Now, of course, we are outside of the EU and it is unclear as to how the UK intends to manage its marine environment. Without the framework of the MSFD, will we see a shift from proactive management of biodiversity with clear environmental targets, to a more reactive, even disaster-based method? And without access to funding streams such as Horizon 2020, what is the future for the kind of intensive research that we have been conducting so successfully? Will economic interests such as commercial fishing and coastal development take priority over marine conservation?

Whatever the answers – and the government’s 25-year Environment Plan did not reveal many – it would be unwise to disaggregate fishing and environmental management and conservation. A sustainable fishing industry is dependent upon a healthy environment, as too are other economically important activities such as recreational fishing, boating and diving – all part of the South West’s tourism offer. We need greater coordination and better integration between all stakeholders, scientists and government if we are to benefit from greater flexibility and speed in decision-making that Brexit, in theory, might deliver.

Marine life – and especially fish – does not care one iota for national boundaries and territories. It moves according to its own impulses and needs. If we want a healthy, sustainable marine environment, that supports everyone, we have to be prepared to follow. There can be no borders for our scientific ambitions.