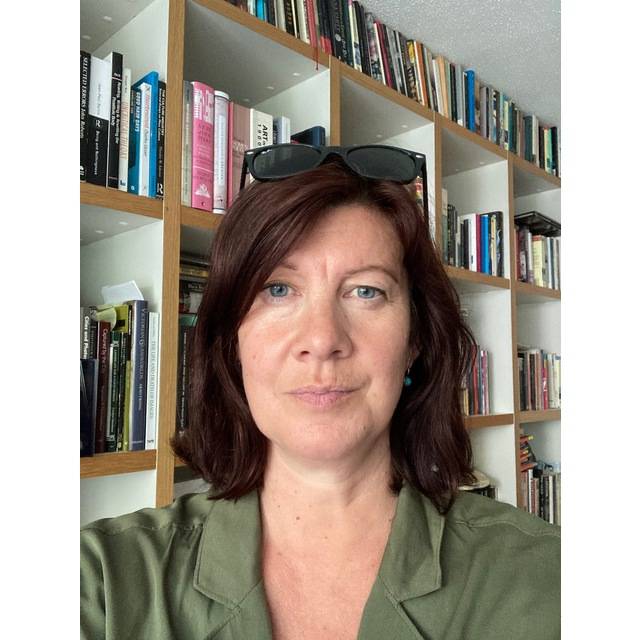 Member of the Higher Education Academy

Association for Photographers in Higher Education

Teaching and research is in the area of contemporary photographic practice. I have a particular interest in the role of women within representation.

Current work in progress is Portrait of a Woman. At my mothers death I inherited photographs and letters which pointed to an interesting family history and I discovered that my grandfather, Leopoldo Savignac, had been a photographer in the Basque area of Spain (Zaragoza, San Sebastian, Madrid). I want to draw on personal memories and combine archival research with fictional recreations. At the work’s centre are the memories of life in Basque Spain in the 1930s embedded in particular stories passed down to me by my mother. There is a potential detective story here as my mother is invisible in this history because she is illegitimate. There is a photograph in Maddis Insausti’s book Mirror of a Past Time which contains an image of a woman who bears a striking resemblance to my grandmother, who is also invisible in this history as a mistress of the photographer Savignac.

Rae's research aims to analyse the labour of femininity in a contemporary photographic culture where this still remains largely invisible. A Real Work of Art uses a model of image-making which is largely dialogic and interactive in its involvement of participants. This piece established a lot of the groundwork for subsequent research, especially in terms of methodology. central to this is the relationship between photographer and subject. A Real Work of Art explores the business of surface appearances through portraits of women whose job it is to crete a facade. The work visually describes a number of retail sites as consisting of both consumption and production.

Publications include Kurl up n Dye, a monograph published by Wild Pansy Press with an introduction by Simon Grennan and incorporating photographs and typography investigating the vernacular in British high street culture. A feature on the book was recently on BBC Radio 4 Woman’s Hour. The research has led to a number of conference papers and articles exploring the photographic image in terms of the vernacular, cultural anthropology and material culture.

2008 MA by Research, Sean Cousin Pentimento: A re-evaluation of the integral polaroid

2005 Arts and Humanities Research Council, Small Grants in the Creative and Performing Arts £5000

2001 Arts and Humanities Research Council, Small Grants in the Creative and Performing Arts £5000

A Portrait of a Woman/Retrato de mujer - work in progress

The project takes its name from a photograph of an unknown woman taken in 1921 by Leopoldo Savignac Battistini, a photographer based in San Sebastian, Zaragoza and Madrid from 1915 until his death in 1948.
I inherited photographs and letters which pointed to an interesting family history and I discovered that Leopoldo Savignac was my grandfather. The photograph bears a striking resemblance to my grandmother, who is invisible in this history as a mistress of the photographer Savignac. She was also a dressmaker.
As my mother's parents were unmarried there is little evidence, but a lot of potential for reimagining.

The Grammar of Glamour
explores the business of surface appearances through the use of imagery within independently owned businesses concerned with the manufacture of glamour. The intention is to ask how the spell of glamour can be broken. And at the same time how the power of material objects can transform the identity and status of those who own them. We cannot now begin to imagine what non-photographic glamour might be like, but we can ask what it represents within an economic, political, even philosophical, system.
“…the fashion object …reveals how far we, as consumers, are from perfection. Fashion’s reminder of fragile mortality is perhaps shard with art, both manifesting fatality – their own failures to endure and to satisfy our desires – in the circulation of common tropes and shared lifestyles.” Chris Townsend Rapture: Arts Seduction by Fashion p8

Remembering the City; On memory, experience and the urban landscape

My interest in memory work has developed from a smallproject called ‘Memory City’. The project investigates the relationshipsbetween personal memory, everyday experience and public space. Its focus is on narratives of security andinsecurity, anxiety and confidence, and belonging and alienation in the urbanlandscape. Using a sequence of themed workshops the project focuses on: thepleasures, risks and dangers of city life; mobility and the cosmopolitan city;and cultural landscapes of the city. The aim is to see how people use theirmemories to construct their understandings of public space in the present.

Inbetween Spaces (2007), explores ideas of marginality on several billboard sites around Manchester and Salford. The bus tour explored the marginal and overlooked in the urban fabric through the rehearsed performance of a tour guide.

In Kurl up n Dye there is a nod to the motifs and pictorial strategies from which other photographers work: There is a long tradition in using photography to document and explore aspects of British popular culture and sometimes with a nostalgia for disappearing worlds. But there is a point to be made here about the stories that don’t get told, or that need a differently skewed vision. Perhaps as Diane Arbus felt when she made the image of an interior of a barber shop there is always another way of seeing a place.

The shop names and typefaces signal economic status,class and taste beyond the frame. The humour in the shop names is self-directed, belonging entirely to the independent trader – to the lower rent, non-corporate, “other mainstream” undertaste that laughs at the aspiring by making deprecating laughter part of the pleasure of aspiration itself. The people and places in Kurl up n Dye understand the operation of glamour’s oxymoron in their lives, making use of the knife-edge between image and reality.

In 'Kurl up 'n' Dye', I think we are squarely in the sights of glamour.Or perhaps, Rae has her sights set on glamour. Either way, we seem more than anything to be looking down the barrel of a gun, which is curious, seeing as the images in ''Kurl up 'n' Dye' ' have been made within the pleasure industry,at the salon. Nobody seems to be having much fun in the peopled interiors that contribute to the work. The salon facades also appear either dreary or shabby.The conventions of documentary photography are assaulted by Rae in 'Kurl up 'n'Dye', not discarded or ignored, so that the private views, the intimate views and the set-up images still seem motivated by a desire to reveal social relationships…

Settling In explores ideas of home and performativity.Using a tradition of artist-led initiatives the research aimed to reassess the diversity of artistic practice funded by the Arts Council in Manchester and to introduce new artists and work to the region, particularly female practitioners. The exhibition was intended as a comment on the corporate extravaganza that is the British Art Show.

Taking home as it’s starting point Settling In explores how we move within and experience this most intimate of spaces – the home becomes a metaphor for the creative process, a locus for female activity, as well as a place of secrets and self, of rituals and routine.

Rae, I. (2009) ‘Shear Class: a visual ethnography of the British hair salon’ in X-cp Streetnotes www.xcp.bfn.org/streetnotes.html

Rae, I. (2008) ‘Some will pay (for what others will pay to avoid): Vernacular typography and the irreverence of popular culture’ in F. Hackney, J. Glynne & V. Minton, eds, Networks of Design, Brown Walker Press

Sponsored by The British Council, Lisbon

2005  Mind Where You Look, Gallery Oldham

2000   Regional Launch of Year of the Artist, North West

National Launch of Year of the Artist,The Lux, Hoxton Square

1997  Domus:North and South, Art Gallery Too: a nomadic artspace for NEW ART

Private residencies in York and London

2017 (Our) Generations and (Expanded) Geographies: Living Feminist Lives for A Feminist Space at Leeds; Looking back to Think forward December 16-17 2017, University of Leeds

2008 Some will pay (for what others will pay to avoid): Vernacular typography and the irreverence of popular culture. Networks of Design, University College, Falmouth

2008 Kurl up n Dye; the vernacular in British High Street culture. The Street, University of California at Irvine

2004 AHRB and A Real Work of Art; Practice as Research. North West Art and Design Research Seminar, Cumbria Institute of the Arts, Carlisle.