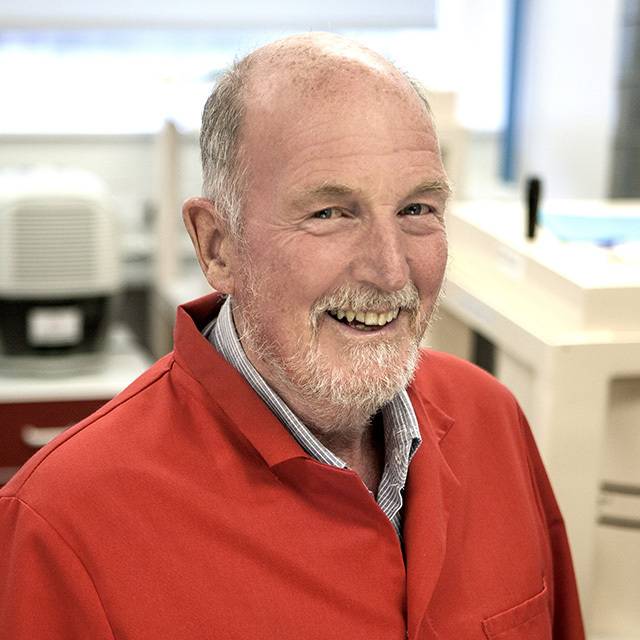 Geoff Millward obtained his Graduateship of the Royal Institute of Chemistry in 1967 by part-time study, while working at the British Rail Research Laboratories at Derby and Doncaster. Subsequently, he undetook a PhD study, at the University of Keele, of gas phase reaction kinetics related to improving the efficiency of propulsion for hypersonic flight.

He obtained his PhD in 1970 and immediately emigrated to Canada where he undertook a postdoctoral study, at the University of Calgary, on the thermal stability of fluorochlorocarbon compounds used in the manufacture the heat shields on hypersonic vehicles. During this time he published several papers in the Journal of Physical Chemistry, Faraday Transactions, the International Journal of Chemical Kinetics and the Journal of Chemical Physics. He was then invited to join Simon Bauer's research team at Cornell University, New York, to work on a NASA contract, concerned with the thermal stability of sulphur compounds. In 1972, NASA announced the termination of the "Apollo" programme and he returned to the UK with the intention of starting in a new research field.

He entered the Oceanography Department at Southampton University as an MSc student and was awarded an MSc 1973. His research project, supervised by Professor Dennis Burton, was on the reactivity of mercury, which gave him an opportunity to transfer his knowledge of kinetics and mechanisms into the aquatic field. In 1973 he was appointed as a lecturer in Plymouth Polytechnic, where he has been ever since. Over the last 35 years much of his research has concerned reaction kinetics in aquatic systems, mainly involving praticle-water interactions, as well as being being involved in major thematic programmes, such as the North Sea Project, the Land-Ocean Interaction Study (LOIS) and Environmental Diagnostics. In 1989 he was awarded a Churchill Silver Medal for his work on the North Sea.

2013 Kuwait Foundation for the Advancement of Science: member of a research assessment panel for Environmental Sciences.

2012-present President of the Estuarine and Coastal Sciences Association.

2008-2009 Guest editor for a special edition of Marine Pollution Bulletin on the Severn Estuary.

2004-2007 Founder member and Member of the Steering Committee of the the NERC-funded AQUANET on Natural Aquatic Colloids.

2003-2008 Member of the External Advisory Committee of the Center for Environmental and Marine Studies (CESAM), University of Aveiro.

2003-2006 Member of the Center of Excellence for Baltic Development, Education and Research (BALTDER), Institute of Oceanography, University of Gdansk, Poland.

2004 Chair of the Working Party on Background Concentrations of Natural and Xenobiotic Substances for the Oslo and Paris Commissions (OSPAR), The Hague, Netherlands.

2003-2004 Senior Editor for a volume of "Marine Pollution Bulletin" containing the reviewed papers delivered at ECSA-34.

2002-2003 Guest Editor (with Professor M.B. Jones) for a Special Volume of "Estuarine, Coastal and Shelf Science" to commemorate the 30th anniversary of the founding of ECSA.

2002-2003 Guest Editor (with C. Neal) for a Special Volume of "Science of the Total Environment" on modelling of environmental processes.

2005-2008 External Examiner for MSc programmes at School of Ocean and Earth Sciences, University of Southampton.

Professor Millward has 30 years research experience focussing on the development of a fundamental understanding of contaminant behaviour in marine systems and the uptake of pollutants by marine organisms and he has published over 100 technical papers on the subject.

His research has received more than £1.7 million in research grants (including DTI, EA, EU, NERC) and £50,000 in commissioned work for regulatory authorities. He has successfully supervised 30 Ph.D. students, in collaboration with the Plymouth Marine Laboratory (PML) and British Maritime Technology (BMT), on the behaviour of heavy metals (e.g. As, Cd, Hg, Pb) and micro-organic pollutants (PCBs, PAHs, surfactants). In 1989 he was awarded a Churchill Silver Medal for his studies of the North Sea.

Currently, he sits on the Advisory Boards for the "Research Centre for Environmental and Coastal Studies” at the University of Aveiro, Portugal and the “Centre of Excellence for Baltic Development, Education and Research" at the University of Gdansk, Poland. In February 2004 he chaired a Workshop on "Background Concentrations for Natural and Xenobiotic Substances" for the Oslo and Paris Commissions (OSPAR). During 2002 and 2003 he edited special volumes of Estuarine, Coastal and Shelf Science and the Science of the Total Environment, respectively. He is currently working on a special volume of Marine Pollution Bulletin.

His research involves examination of particle character, coupled with radiochemical techniques to evaluate the kinetics and mechanisms of particle-water interactions of contaminants. Evaluation of time-dependent uptake, involving a range of particle types, can be used in the development of predictive, computer-based models for contaminant transport. The results of these studies are being used to enhance the performance of advanced computer codes (ECoS and PISCES) which are capable of predicting the fate of contaminants in natural and polluted systems. Professor Millward has worked on the the Ria de Aveiro, with Portuguese colleagues, studying in the fate of Hg contamination from a chlor-alkali plant. His group has evaluated the impact of the construction of a tidal barrage, in Plymouth, for the Environment Agency.

Jones-Hughes, T.L. (2002). PhD "The Influence of Surfactants on the Sorption of Phenanthrene in Natural Waters".

Since 1980 Professor Millward has supervised 36 PhDs and 2 MPhils.

2007 EPSRC £34,611 Mobilisation and transport of contaminated sediments in a high capacity flume

2006 Environment Agency. £4,000. Review of the Severn Estuary in collaboration with the MBA.

2005 EPSRC £145,000 A test bed for coupling chemical reactivity with hydrodynamics.

2004 NERC £60,000 Formation of the "AQUANET" Geocolloids Group, with the University of Birmingham.

2003 NERC £ 26,500 Characteristics of estuarine particles, with the University of Birmingham.