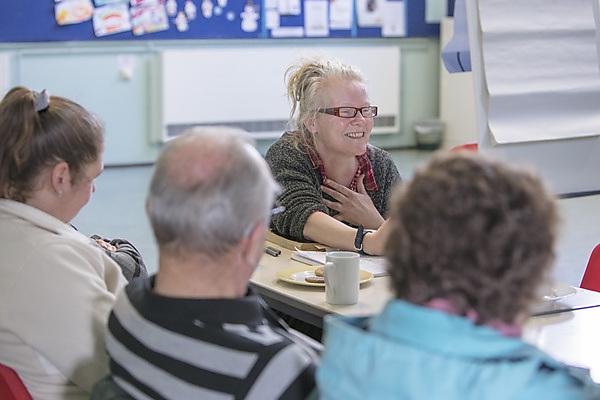 Poet Karen Hayes, who helped judge the competition and who runs poetry workshops at Memory Cafes

The winners of a national writing competition devoted to the theme of memory will be announced on National Memory Day, Thursday 18 May 2017.

National Memory Day is part of Dementia Awareness Week and a celebration of the power of poetry for those with and affected by dementia. It is the creation of a partnership of Literature Works, the University of Plymouth, Alzheimer’s Society and The Poetry Archive.

“I chose ‘The Fig Tree’ as the winning poem amongst a very good shortlist because it combines vigilant looking with generous feeling, and allows each to benefit the other.”

Speaking of her win Judy said:

“This prize is incredibly meaningful to me. ‘The Fig Tree’ is my response to ideas of exile and belonging as well as the importance of family. I am thrilled to be associated with the hugely important work done by National Memory Day, and its increasing urgency.”

“The writing is clear, cold, seemingly dispassionate, taking us to the heart of trauma and its effects on memory, leaving the reader with the spaces to wonder what we and history may also choose to forget. This is superb writing: both imaginatively rich and confidently spare in crafting.”

"I was thrilled to find I had won the prize for best short story. I found the theme of 'memory' intriguing and inspiring to write about. It is also lovely to support Memory Cafes which will use poetry to help those with dementia and memory loss – something that will have touched people close to many of us."

Jamie Egdecombe, Writer-in-Residence at the University of Plymouth, judged the Young Writer prize. He commented:

“What amazed me about the young people who entered this competition was their maturity and insight. Some explored their own memories, while others the memories of those closest to them. In the end I felt compelled to choose “Overthinker” by Emily Breeds as the overall winner. The state of mind evoked, that of anxiety of what will and will not be remembered, well expresses the slippery nature of memory.”

“I got the email whilst studying in the school library and couldn’t stop smiling! I’m so grateful to have won, as the poem is very personal to me and came from the heart.”

Primary Carer Voice was judged by Keith Oliver, a former head teacher and Ambassador for the Alzheimer’s Society and who has dementia. Speaking of Sarah’s entry Keith said:

“I really liked the way the author tackled the subject, the way she introduced and developed the richness of the characters, the twists in the story. I liked the inter-generational aspect. I could clearly picture the scenes and interaction between the characters. I thought it was realistic in its portrayal of Freda and her dementia without slipping into the negative traps which writers often do.”

“I feel humbled and amazed to have won this competition. I have been to Memory Cafes as a participant, a carer and a speaker and have found them a wonderful way of supporting people at the grass roots level. I hope I can help build bridges of understanding through my storytelling. “

In all, 1341 competition entries were received with an international reach from across the continents. Within the shortlists there were entries from the UK, Ireland, France, Switzerland and Trinidad and Tobago.

“Our writing competition with its theme of writing a poem or short story on the subject of ‘Memory’ served a particular purpose. It set people across the UK and overseas thinking about what memory means to them, still more, what memory loss might mean. I would say the majority of the entries received captured direct experience of dementia whilst others grappled with the notion of recollection of past events, often painful, sometimes sweet. The competition will continue to support those with dementia, their carers and loved ones through the power of poetry.”