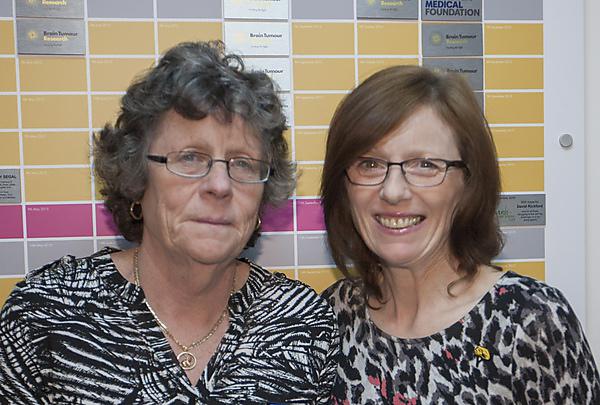 Judith McMahon placed a tile on the Wall of Hope to commemorate husband John's birthday as she toured the Brain Tumour Research Centre of Excellence at Plymouth University. The location of the memorial is particularly poignant as John, 61, was a cleaning and environmental services manager at the University and had worked there for 16 years before his death in June 2014.

Judith, who toured the world-class laboratories at Plymouth University Peninsula Schools of Medicine and Dentistry, said: "John had to retire through ill health in 2010 after he was diagnosed with a low-grade glioblastoma tumour. A year later the tumour had changed into an aggressive grade 4 and we were told, with treatment, he could live for 20 months. We were lucky in that he actually had another three-and-a-half years. More research and better funding could give people like John more hope, more time, and eventually lead to a cure."

During the tour Judith was shown around the Centre of Excellence located at Plymouth University Schools of Dentistry and Medicine where the team, lead by Professor Oliver Hanemann, holds a reputation as a leading facility looking at low-grade brain tumours.

Brain tumours kill more children and adults under the age of 40 than any other cancer, yet just one per cent of the national spend on cancer research is allocated to this devastating disease. Around 4,300 people are diagnosed with a low-grade brain tumour in the UK each year. Generally referred to as benign, these slower growing tumours are not immediately cancerous but can be just as devastating and bring equally dangerous and debilitating side effects to patients and their families.

Judith was given first-hand insights into the range of investigations taking place at the lab where the team is working to further advance translational research - taking research from the laboratory bench to drug testing and clinical trials. She learned that brain tumours are not like other cancers. The powerful protection mechanism that is the blood-brain barrier means that many of the typical treatments to fight cancers occurring elsewhere in the body cannot be applied to brain tumour patients.

"When John was diagnosed we felt so desperate but my visit to the laboratory has at least given me some hope that progress is being made to find better treatments and, ultimately, cures."

"John was a well-liked and much respected colleague who is missed by those who worked with him. Judith's support for the Brain Tumour Research Centre of Excellence at the University is much appreciated and I am sure that with her, we hope that a solution to this devastating condition is discovered soon."

Each tile on the Wall of Hope represents the £2,740 it costs to run the centre each day. These funds pay for the research team, support staff and scientific equipment.

“We are striving to fund a network of seven dedicated research centres whilst challenging the government and larger cancer charities to invest more in brain tumour research. Help us fund the fight. Together we will find a cure."