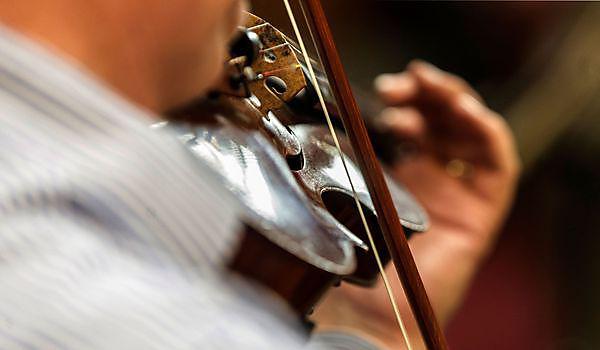 Taking part in musical sessions can help women and children move on from the debilitating effects of domestic violence according to new research from Plymouth University.

The study, commissioned by the Plymouth Music Zone charity, has found that mothers and children can begin to build resilience and “break the cycle of abuse” through group music sessions that encourage self-expression.

The report – Feeling their Way: women and children using music to navigate transitions from domestic violence – was conducted by Professor Jocey Quinn and Claudia Blandon of the Plymouth Institute of Education, and was based upon observations and interviews conducted at a domestic abuse refuge in the city.

Funded by The National Foundation for Youth Music, the research will be launched at a special seminar at the University this month focused upon helping people navigate transitions in their life, and set to be attended by health and social care professionals, funders, and academics.

Professor Quinn, an internationally renowned expert on learning outside of formal education, believes the work could have broader significance.

She said: "Domestic violence against women is a huge social problem. Our research contributes to a wider understanding of this issue, showing the vulnerability and the resilience of women and children who escape and seek the vital support of the refuge. And it demonstrates how Plymouth Music Zone is sensitively using music to help support their transitions into safety and freedom."

Recent figures published by the Office of National Statistics estimated that around 1.2 million women in the UK suffered domestic abuse in 2012 and 2013, with an average of seven women per month being killed by a current or former partner.

Plymouth Music Zone runs weekly sessions at the Domestic Abuse Refuge, which houses up to 11 women and 28 children at any one time while they wait for more permanent accommodation to be found. The refuge prioritises those at high risk of violence, and those people referred by other agencies.

The sessions focus upon using music in creative ways: helping mothers and children to make their own small cherished instruments; drawing to music; using computers to compose their own songs; and singing and playing different instruments together.

Over the course of two months the research team observed the music sessions, and then conducted in-depth interviews with mothers and some of the young children. These interviews focused on the music session rather than the trauma that had brought them to the refuge.

“We found that the music sessions left participants feeling calm, but with energy. This is important in the recovery stage because when you are calm you can see things from different perspectives and are able to better handle the demands of your daily life.”

Other observed benefits from the sessions included improved confidence for those for whom English was not a first language, and one girl learning to play the piano – something that the team felt would help her in her transition to a new school.

The study concludes with a number of recommendations, including the training of more music leaders, and expanding the Music for Change programme to include new sessions aimed at different age groups within the refuge, and people outside of the institution as well.

“One of the goals of domestic violence is to silence women and children, and make them feel hopeless and worthless and unable to break free of such norms of behaviour,” added Professor Quinn. “Music for a Change counters this, helping to break a potential cycle of abuse for the next generation. In doing so it builds capacity for the future, and reduces potential resources that might be needed to support future generations.”

“Plymouth Music Zone is all about reaching out to bring music to the forgotten corners of the city to vulnerable children and their families. This powerful work shows how music can create a real sense of hope in people’s darkest times and give them the strength to imagine a future that’s different. I was humbled to see that actually just one hour a week of music can give them an immense sense of freedom again and that means so much.”

The launch of the research, at the Navigating Transitions in Life and Learning conference, takes place on 19 September at the University.

The National Foundation for Youth Music