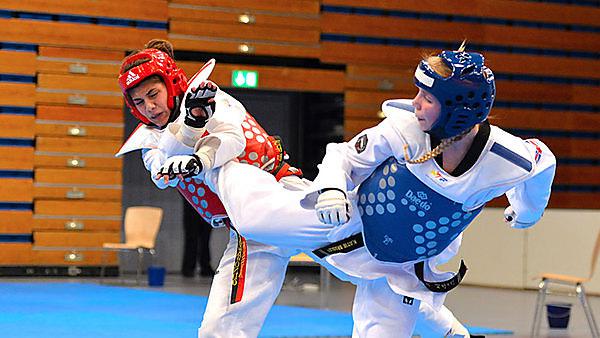 The 18 year old Mechanical Design and Manufacture student, who is part of the University’s Sporting Excellence Scholarship programme, received the call up to represent her nation in the under 46kg division at the competition in Romania on 19 November.

This year is Katie’s first year as a full senior, but the talented student has already represented her country four times. Only last year Katie brought home a World Junior bronze for Great Britain and became Commonwealth Junior Champion in Edinburgh for Team England.

Katie said: “I’m so pleased to get another chance to represent Great Britain at a major competition and I hope I can put in a good performance and bring home a medal, not just for the country but also for Plymouth”

Katie moved up to the senior ranks in January this year and has already seen her fair share of success, winning the German Club Championships, Tongeren Open, British International Open and Berlin Open.

She also earned a third place bronze at the G1 Spanish Open – which was her first senior podium at a G-class Olympic ranking competition. In addition she put in strong performances against the world number five and world senior bronze medallist, demonstrating she is a force to be reckoned with.

Katie added: “Taekwondo is my life and my goal is to compete at the Tokyo 2020 Olympic Games, but it’s important to have a backup plan. I’m really enjoying my engineering studies and looking forward to mixing the two and representing Plymouth University whenever I can. I’m very grateful and proud to be a Sporting Excellence Scholar.”

For now, the training and preparations continue, including competing at the G1 Croatia Open on 7 November. Plymouth University offers some financial assistance as part of its Sporting Excellence Scholarship but Katie also has to self-fund for the European under-21 Championships, and has set up a CrowdFunder page.

Professor Richard Stephenson, Deputy Vice Chancellor for Student Experience, said: “We are delighted that Plymouth University Sporting Excellence Scholar Katie has been selected to represent Great Britain. Our scholarships are designed to enable our current and future elite sporting stars to stay in, or come to, Plymouth to train and compete at the highest level whilst studying at an institution ranked in the top one per cent of world universities. We are all very proud of Katie’s achievement and wish her all the best in the European Championships.”