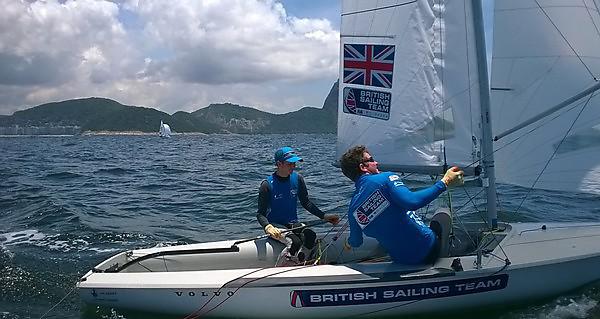 A top-class sailor from Plymouth University has been selected as a training partner for the Team GB Olympic sailing squad.

James Taylor, who is part of the University’s sporting excellence scholarship programme, is already in Rio de Janeiro to help the team train in the run up to the summer Olympics.

Specialising in the 470 Class, James will be used as a bench mark for the team’s development and a consistent measure to enable them to improve. The role of a training partner is pivotal as it enables the selected boats to gain every advantage of speed through intense preparation away from the eyes of competitors.

“James has been selected due to his natural abilities in the sport and his work ethic. Over the past year he has been showing the signs that could make him both valuable and potentially successful in the sport. He has been used in this role previously a year ago and the feedback was excellent. With seven months to go to the games, his input might just help turn silver medals into gold medals.”

In his first year of studying mathematics and finance at the University, James is pleased he can balance his study with his training and competition commitments. Already a four-time national junior champion, he is aiming to embark on a full-time Olympic campaign after he completes his degree.

“I'm so pleased to have been chosen as a training partner for the Olympic squad. I've been competing in sailing for 12 years and it’s great that my hard work has paid off. Studying at Plymouth, I'm able to balance my work with my sport, and its location is great, being right next to the water. Hopefully being a training partner will give me valuable experience and help me undertake a full Olympic campaign after I've finished my degree.”

“I am delighted to see Plymouth University Sporting Excellence Scholar James Taylor receive this recognition of his talent, and for him to have the opportunity to contribute so fully to the training and development of Great Britain’s elite sailors as they prepare for the World’s biggest sporting event – the Olympic Games. It is always exciting to see our students experiencing sporting success, particularly at the highest international level.

“By working together with the city we are enhancing the sporting offer to help retain our region’s talent and to attract inspirational sporting figures, such as James, into Plymouth. Through our partnerships, our students have unrivalled access to some of the country’s top sporting facilities – including the perfect natural training arena for our talented water-based athletes, the Plymouth Sound. Through our Sporting Excellence Scholarship programme and our links with National Governing Bodies we are able to attract and nurture more elite sailors within the city.”