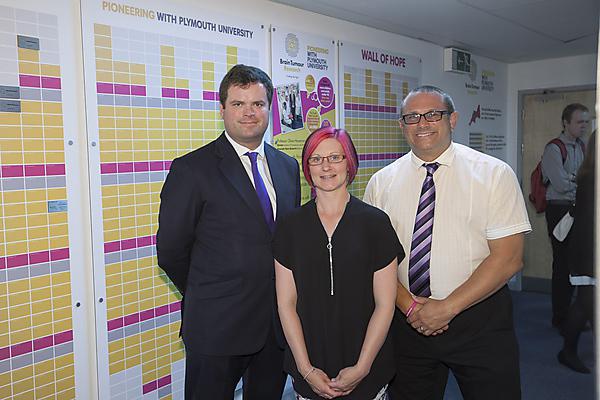 The South West has the highest rate of brain tumours diagnosed in the UK, so it was with particular interest that Kevin Foster, MP for Torbay, toured the laboratories at the Brain Tumour Research Centre of Excellence at Plymouth University last week. He heard the shocking statistic that brain tumours are the biggest cancer killer of children and adults under the age of 40.

Mr Foster met his constituent Joanne Martin from Paignton and her mother Lesley Phillips. Joanne’s four-year-old daughter, Leah, was diagnosed with a high-grade medulloblastoma brain tumour when she was just two. Since then, Joanne has been raising money for Brain Tumour Research, last month abseiling down England's highest manmade waterfall, Canonteign Falls.

Mr Foster praised the work of the Centre, saying:

“It is brilliant to see this happening in the South West and giving people hope.”

“The skills and high-end technical ability that I saw at the Brain Tumour Research Centre of Excellence prove that the region is a great place in which to do world-beating research. Not only does it provide hope to those affected by brain tumours, it also provides opportunities for skilled researchers to stay in the South West.”

“The tour was a real eye-opener: a day of research here at the Centre costs £2,740. Research into brain tumours only gets around one per cent of the total spend on cancer research, so it’s really underfunded. The lab tour blew my mind and made me even more determined to continue fundraising for this cause.”

Professor David Parkinson, from Plymouth University Peninsula Schools of Medicine and Dentistry (PUPSMD), accompanied the visitors on the tour. He commented:

“It is good for us to be able to show people our work in the environment in which it is carried out. Working with our partner Brain Tumour Research we are indebted to local supporters of our research.”

Brain Tumour Research is the only national charity dedicated to granting all available funds to sustainable life-saving research into brain tumours; supporting the UK’s largest dedicated network of laboratory-based scientists. The Centre at Plymouth University, launched in 2014, is a leader in the investigation of low-grade brain tumours, which typically affect children and young adults.

£1 million a year is needed to continue the vital research at the Brain Tumour Research Centre of Excellence at Plymouth University. A local man recently left a gift of £100,000 in his will to research into brain tumours at Plymouth University, and a number of organisations offer support including Plymouth Argyle FC, Plymouth Raiders, Dartmoor Zoo, WBW solicitors, Bright solicitors, and local branches of Santander.

The quality of health research at PUPSMD is nationally recognised. The Research Excellence Framework 2014 ranked the organisation top in the UK for the quality of its research outputs. As well as being one of four Research Centres of Excellence for charity Brain Tumour Research, it is also one of the lead academic partners in the Alzheimer’s Research UK South West Research Network.