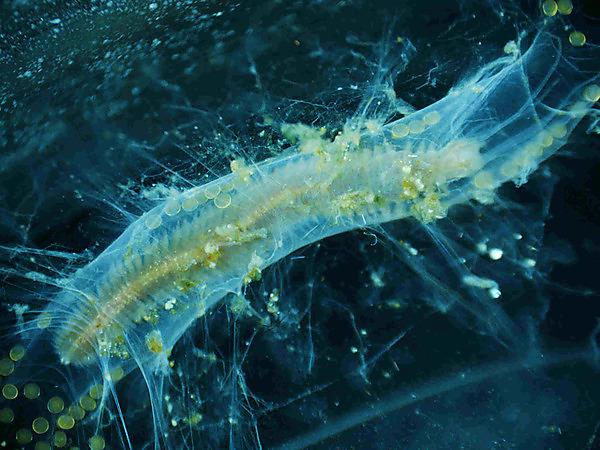 Marine organisms living in acidified waters exhibit a tendency to nurture their offspring to a greater extent than those in more regular conditions.

Researchers at Plymouth University have found that polychaete worms located around volcanic vents in the Mediterranean grow and develop their eggs within the protection of the family unit – in contrast to closely-related species that release them into the water column to fend for themselves.

The scientists say the findings could provide an important insight into how organisms might adjust to increasing levels of carbon dioxide in the sea – and the ramifications that might have for future biodiversity.

Their report – published in Scientific Reports – was based on field research off the island of Ischia in Italy and lab-work in which the breeding patterns of the worms were observed at closer quarters.

Noelle Lucey, a researcher within Plymouth University’s Marine Institute, and of the University of Pavia, said:

“One of the most interesting annelid worms here typically grows to around 3cm in length and is found on the seafloor. It was previously thought that their breeding is triggered by a full moon, when they swim up to the surface and release – or ‘broadcast’ – their eggs. But our studies at the CO2 vents off Ischia have found something very different: those species living near the volcanic vents, in waters rich in carbon dioxide, seem to have adapted to the harsher conditions by brooding their offspring.”

The team found that 12 of the 13 species that had colonized the vent area exhibited brooding characteristics, most notably producing fewer and larger eggs that were usually retained within some form of protective sac. Ten of those species were in higher abundance around the vents than in the ambient areas surrounding them – some by a ratio as high as nine-to-one.

The observation that brooding worms dominated the CO2 vent areas, and existing evidence of physiological and genetic adaptation in vent-inhabiting species, prompted the researchers to take immature adult Platynereis dumerilii specimens and attempt to cross breed them in the laboratory. A male – taken from the ambient control area – and a female – from the vent zone – almost immediately began to breed. But instead of the typical broadcast pattern, the eggs produced were five times larger than the average and were laid in a complex tube structure or brooding pouch.

When genetic analysis was conducted, it became clear that worms from inside the CO2 vents were from a sibling species of Platynereis massiliensis, one that has diverged from Platynereis dumerilii in the recent past – confirming that all of the polychaete species are brooders of some sort.

Dr Piero Calosi, from the University of Quebec in Rimouski, Canada, said:

“Our study confirms the idea that marine organisms have evolved brooding characteristics in response to environmental stresses, such as ocean acidification.”

On the breadth and importance of their study Dr Chiara Lombardi, from ENEA, Italy, said:

“Studies like ours can help substantially advance our predictive ability on the fate of marine biodiversity simply based on species characteristic, such as their reproductive strategy.”

“This study brings us one step closer to understanding which marine species will be more resilient to climate changes. In fact, our work helps in establishing a fundamental principle to be used to guide decisions on the conservation of marine ecosystems and to help better manage the fisheries and aquaculture industries.”

More about the University's Marine Institute