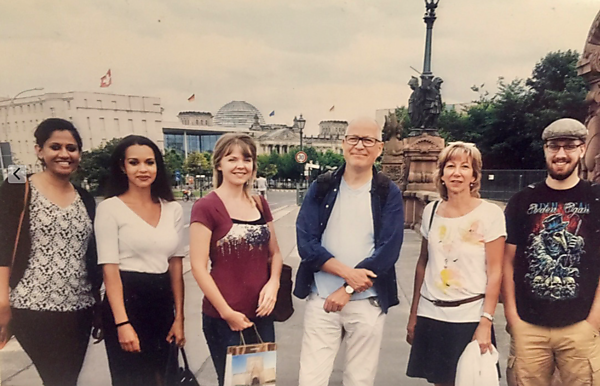 Kati O'Brien, second left, with colleagues from the Robert Koch Institute in Berlin

Kati O’Brien, a final-year student in Biomedical Sciences from Plymouth University, has returned from a six-week visit to the Robert Koch Institute in Berlin where she worked with a group studying Mycobacterium bovis (Mb), the cause of bovine TB in cattle.

The trip was designed by Dr Michael Jarvis of Plymouth University and was funded by the Seale-Hayne Educational Trust (SHET), which aims to support higher education and research in the fields of agriculture, rural land use and related disciplines. Kati is the third student to be involved in this exchange, which has been funded by a grant awarded initially in 2014.

The project which Kati worked on in Berlin, and for which Michael Jarvis and Plymouth University are partnered, involved investigating types of a herpesvirus found in different species of infected badgers, with the aim to develop a spreadable or single use conventional vaccine to target the transmission of Mb from badgers to cattle. This project may also give insight into human TB disease. The project is carried out under the supervision of Dr Bernhard Ehlers from the Robert Koch Institute.

Kati, who is now studying medicine at Bart’s and the London School of Medicine and Dentistry, commented:

“The project was extremely enjoyable, and presented an unrivalled opportunity to learn and develop several practical techniques that otherwise I would not have had the opportunity for, such as PCR (I was even able to assist in some organ preparation with another member of the research group). Dr Ehlers’ team is fantastic, and from day one I was made to feel very welcome, and received tuition for each of the techniques so that I felt confident carrying them out alone. The facilities are second-to-none, and Berlin of course is also a great city to explore. I would definitely recommend this to anybody who is interested in research; I am now studying medicine, and in the future I hope to further my research interests, for which this experience has been invaluable.”