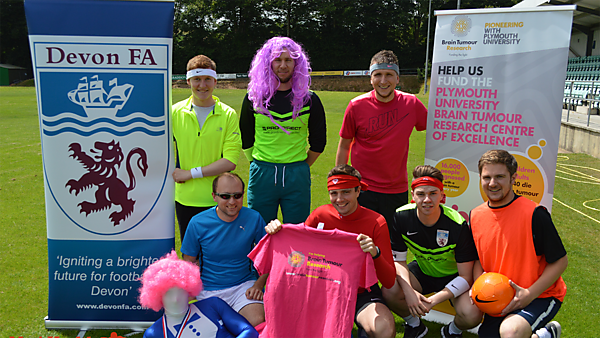 A team from Devon FA is set to raise money for the Brain Tumour Research Centre of Excellence at Plymouth University, by taking part in the Men’s Health Survival of the Fittest 10K assault course at Wembley on 21 November.

The eight contestants are in training for the event, which involves at least 50 obstacles to be tackled on the 10K course.

In order to support their entry fee, the team has set up a fundraising webpage with Crowdfunder where members of the public will be asked to pledge money to support the eight with rewards in return. More information is available by visiting www.crowdfunder.co.uk/devon-fa-btr.

Any extra funds raised via crowdfunding will go to support research into brain tumours at Plymouth University, as will all the sponsorship money gained from completing the Men’s Health Survival of the Fittest.

Devon FA has adopted Brain Tumour Research at Plymouth University as its charity this year, and this is just one of many activities planned to raise funds. Others include a football tournament with the Devon Junior and Minor League, coffee mornings, horse racing events and an It’s a Knockout event at the end of the season. Devon FA aims to raise at least £5484 by the end of the season – enough to pay for two days of research.

More people under 40 die of a brain tumour than any other cancer. Brain tumours kill over twice as many women as cervical cancer, and more men under the age of 45 than prostate or any other cancer. Brain cancer incidents are actually rising: 23 per cent higher for men and 25 per cent higher for women in 2012 than in 1970. Brain tumours are responsible for 20 years of life lost and the South West has the highest rate of brain tumours diagnosed per million in England.

Chris French from the Devon FA, who is a member of the Men’s Health Survival of the Fittest team, said:

“We are delighted to be supporting Brain Tumour Research at Plymouth University and we are excited to have the opportunity to raise funds by taking part in the Men’s Health Survival of the Fittest. We hope that people will support our efforts to get there by backing us on Crowdfunder, so that we can then go on to raise money for this superb cause.”

Contribute to this event