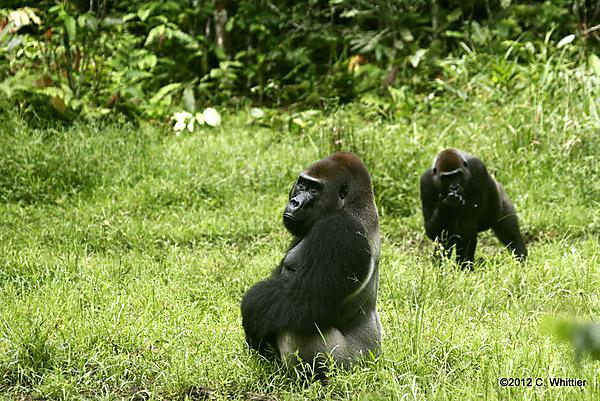 The multi-institutional study is led by Dr Michael Jarvis at Plymouth University, and is published today, 25th March 2015, in Vaccine.

African apes serve as a main source of ebolavirus transmission into the human population. As a consequence, the prevention of ebolavirus infection in African apes could reduce the incidence of future human ebolavirus outbreaks. Ebolavirus is also highly lethal to African apes, and is regarded as a major threat to the survival of these populations in the wild. Such a ‘disseminating’ vaccine offers hope for both stabilizing these endangered ape populations and protecting humans against the devastating effects of Ebola.

The innovative approach may overcome the major hurdle to achieving high vaccine coverage of these animals. They live in of some of the most remote, inaccessible regions of the world which makes conventional, individual vaccination near impossible.

Apart from being very immunogenic (able to provoke an immune response) and species-specific, CMV can also spread easily from individual to individual, a process which remains remarkably unaffected by prior CMV immunity. This is the basis of the team’s current innovative strategy of using a CMV-based ebolavirus vaccine that can spread through wild ape populations as a means to provide high levels of protective ebolavirus-specific immunity without the need for direct vaccination.

The current publication expands on a 2011 study, in which the same collaborative research team first showed the ability of a CMV-based vaccine to provide protection against Ebola virus in a mouse challenge model.

Most Ebola virus vaccine mouse studies, including this earlier 2011 study, have only assessed protection against Ebola virus infection shortly after vaccination (generally within six weeks post-vaccination). The present study showed that immunity induced by CMV is extremely long-lasting, with Ebola virus-specific immune responses being maintained for greater than 14 months (equivalent to half the life span of a mouse) following only a single dose of the vaccine.

Importantly, immunity induced by the CMV vaccine was able to provide protection against Ebola virus at least until 119 days (approximately four months) post-vaccination. Long-lasting immunity will be critical for the eventual success of this disseminating vaccine approach. It is also an attractive characteristic for a (albeit non-disseminating) CMV-based Ebola virus vaccine for direct use in humans, which is an additional area of development of the current collaborative research group.

The next step, which is nearing completion, is to trial the vaccine using CMV in the macaque EBOV challenge model (regarded as the ‘gold standard’ for testing vaccines in a model translatable to Ebola infection in great apes and humans). The results from this study further support the utility of this approach and will be published in the next few months. Many questions clearly remain, including the nature of the immunity conferred by disseminated CMV vaccines (in the current study mice were directly inoculated).

“We must walk before we can run, but this study provided a little skip,” said Dr Michael Jarvis, corresponding author on the study from Plymouth University Peninsula Schools of Medicine and Dentistry. “However, this disseminating approach does potentially provide a workable solution to a currently intractable problem of achieving high vaccine coverage in inaccessible ape populations. Given the impact of ebolavirus on African ape numbers in the wild, and the role of apes as a route of ebolavirus transmission to humans via the bush meat trade, such a vaccine would be a win-win for humans and wild apes alike.”

To this end the project has been incorporated as a component of an international research program, which includes key players such as the World Wildlife Fund and National Institutes of Health, which are dedicated to driving the project forward to mobilization.