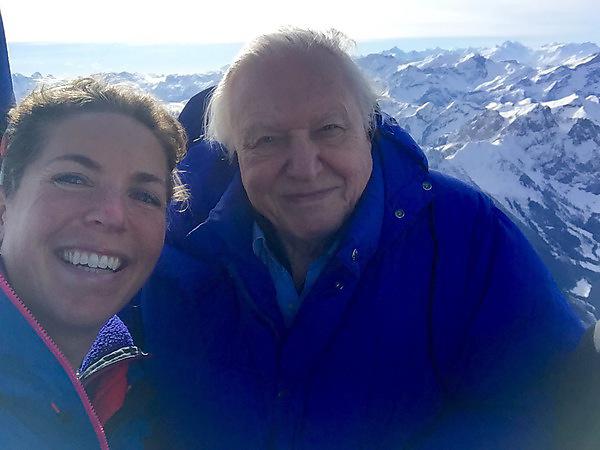 Among the millions tuned in to BBC Planet Earth II each Sunday is a West Country doctor who has first-hand experience of the programme.

Dr Lucy Obolensky, mum of two, GP, Emergency Department Staff Grade, and programme lead for the MSc Global and Remote Healthcare at the University of Plymouth, has recently supported Sir David Attenborough as a medic in the hot air balloon for the opening scene of Planet Earth II.

"I’ve been working with BBC crews intermittently over the last ten years, mostly teaching advanced medical skills to BBC crews visiting remote parts of the world,” said Lucy. “I was contacted by the BBC via Phoenix Expedition Medicine to take part in Planet Earth II where I was part of a team of doctors seconded to different programmes in the series. Whereas with other programmes we would have provided training to the crew, because the Planet Earth II crews were being deployed to some austere environments they decided that they needed doctors to accompany them. I was the lucky one being up in the balloon with Sir David; my colleague James Moore had to spend 16 days in sub-zero temperatures camping in penguin poo!”

For the mountain programme, Lucy spent five days with Sir David and the team at Chateau d’Oex in Switzerland. There, Lucy had to accompany Sir David in a hot air balloon. She said:

“Everything up there was phenomenal, the most amazing views. We had a bit of a bumpy landing though – the basket tipped the opposite way to that which we were expecting and rather than supporting Sir David I actually ended up on top of him. Luckily, no harm was caused to our national treasure!”

In the city programme of Planet Earth II Lucy accompanied Sir David to the top of The Shard for a two-day shoot. She said:

“We went right to the top of the building and Sir David was amazing. There were 300 steps to the top and he barely stopped for a breather!”

So, what was it like to work with one of the world’s most popular and respected television presenters?

“It’s an indication of the broad appeal that Sir David has that everyone in my family, from my nine-year old nephew to my husband and my granny, was as excited about this opportunity as I was. His popularity spans generations and he was an absolute joy to work with.”

Since 2000 Lucy has completed over 20 expeditions, including to Africa, South and Central America, India, Tibet, Cambodia and Vietnam. She was the medic for the Help for Heroes Kilimanjaro Summit and she also teaches advanced medical skills to explorers and expedition leaders at the Royal Geographical Society and the BBC. Increasingly she is providing training to families planning that ‘once in a lifetime’ trip to remote and challenging parts of the world.

One organisation with which Lucy has a close working relationship is The Northern Rangelands Trust. This is an organisation which supports communities and conservation in an area of northern Kenya which borders Somalia. The area is volatile, with border clashes, inter-tribal fighting, destruction of the land and the killing of wildlife.

Over the past four to five years Lucy and colleagues have helped the Trust and local communities to implement a health care system where there was previously nothing and where people live at least six hours away from the nearest functioning hospital.

They have achieved that by bringing a whole new level of communication between various agencies, resulting in a coordination of services and effort.

MSc in Global and Remote Healthcare at Plymouth University