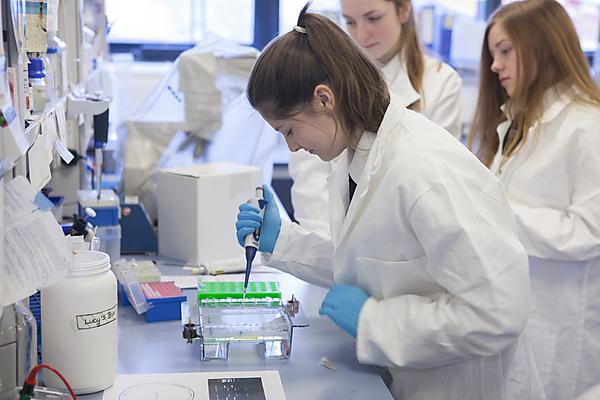 Recent news has highlighted a shortage of teachers trained to degree level in the subjects in which they teach, a situation especially true for the sciences.

One solution proposed by education experts was greater encouragement at school level for pupils to consider science as a topic for further study and their careers.

As part of British Science Week, Plymouth University Peninsula Schools of Medicine and Dentistry has opened up its labs to Year 9 pupils from 12 schools in and around Plymouth, so that they could get hands-on in the laboratory and see what it is like to be a scientist.

The SoCool for Science event took place at labs on Plymouth Science Park. Pupils met with research students and scientists at Plymouth University Peninsula Schools of Medicine and Dentistry and spent time on science projects, including extracting DNA from living cells (bananas), fruit fly genetics and how they are used as a model for research into human diseases, and cell culture where pupils had a go at culturing some cells.

SoCool for Science was organised by Professor David Parkinson and his colleagues at Plymouth University Peninsula Schools of Medicine and Dentistry. He said:

“If we are to secure the future of research science in this country, we need to work harder at encouraging pupils to get excited about careers in science now. SoCool for Science is all about enthusing pupils about science so that they consider becoming research scientists of tomorrow. We’ve made the sessions fun as well as educational and are keen to show that not only are scientists doing research that is relevant to everyone, but that scientists themselves come from a variety of walks of life and backgrounds.”

“We have students who come to these visits who then go on to do Nuffield projects during their A level holidays, study science and medicine at university and choose scientific careers as a result – so SoCool for Science really does make a difference.”