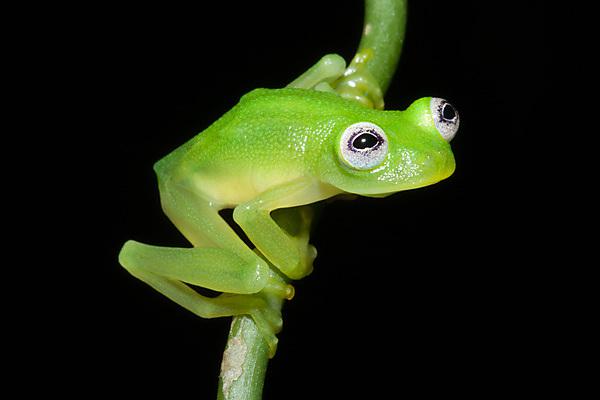 A Plymouth University lecturer is one of three scientists to have discovered a new glass frog in Costa Rica – the first in the country since 1973.

The frogs have a typical appearance from above but it is their translucent abdominal skin, allowing the internal organs to be visible to the naked eye, which lends it the name ‘glass’. This new species – Hyalinobatrachium dianae – is distinguished by its granular dorsal skin, lack of light or dark spots, white eyes, distinctive call and highly divergent DNA sequence from other species in its group.

There are 150 known species of glass frogs in the Central and South American regions, and H.dianae takes the total inhabiting the Costa Rican rainforests up to 14.

Dr Puschendorf, from the School of Biological Sciences at Plymouth University, along with Brian Kubicki and Stanley Salazar invested two years of studies in the field and in the lab that resulted in the publication proposing the new species. He said:

“This is the kind of find we hope will inspire future generations of biologists to keep searching, being curious and exploring. We now have wonderful molecular tools, we can rapidly barcode organisms and identify them, but understanding the biology of a species fundamentally requires like in this case, hard work in the field. Having both those skills in the field and the laboratory, but mostly the passion to discover is what makes biology such an exciting career.”

Inspired by the find, more than 40 years on from the last discovery of a new species of glass frog from within Costa Rica, Brian Kubicki, founder of C.R.A.R.C., added:

“It is exciting to find a new species of glass frog in such a tiny country that has been heavily studied for more than a century. I moved to Costa Rica 17 years ago to dedicate my life to studying Costa Rica’s amphibians, and also put into practice pioneering methods to conserve them in situ. Its habitat lies mostly in protected conservation areas with few roads so it is unlikely human development will pose a major threat to the species in the future.”

Find out more about study paths in Science and Engineering

From animal behaviour and evolution, visit the School of Biological Sciences page

Why should we conserve biodiversity? See the BSc (Hons) Conservation Biology course page for more information