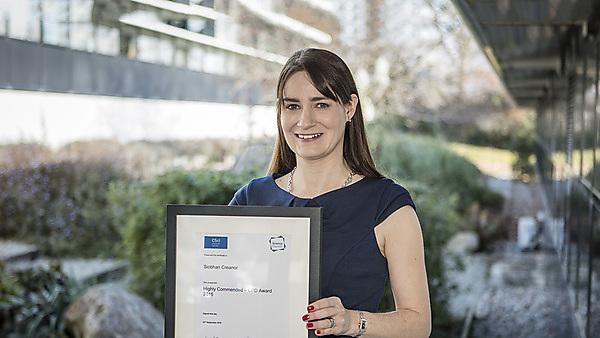 Five awards were made this year and two were to scientists from Plymouth University – Siobhan and Jemma Walker, a PhD student and dental researcher.

PenCTU, of which Siobhan is Director, came into being from a local clinical trials group which started life from a single large randomised trial investigating the role of cannabinoids in multiple sclerosis in 2000. It became known as the Peninsula Clinical Trials Unit when its UK Clinical Research Collaboration (UKCRC) registration was confirmed almost 10 years ago.

Part of PUPSMD, PenCTU has provided vital support to over 40 clinical trials across the country for a wide range of studies investigating topics such as: drug therapies for brain and nervous system tumours; home-based support for patients with heart problems; using a cholesterol-busting statin to treat Parkinson’s disease; alternatives to chemotherapy for those with a form of leukaemia; various treatments and therapies for multiple sclerosis; support for prisoners with mental health problems near to and after release; and more.

Siobhan also leads the medical statistics group at PU PSMD, which undertakes research, commercial projects, consultancy and teaching, within PU PSMD and beyond. An example is the Down’s syndrome screening Quality Assurance Support Service (DQASS) which has been run within the group since its inception in 2006 and the internationally-renowned EarlyBird study. The group also takes pride in encouraging and nurturing talented and enthusiastic junior statisticians, providing them with opportunities to develop their careers, take part in impactful projects and enabling them to apply for chartered status in the future.

“I am delighted that my achievements in CPD have been highly commended by the Science Council. When the Royal Statistical Society announced that Chartered Statisticians could also apply to be Chartered Scientists, it seemed an obvious choice, as I firmly believe that statisticians have an ever increasing role to play in the scientific – as well as healthcare – communities.”

“Chartered status is a great way of ensuring that you continue to develop in the profession you are working in. It also provides a direct route into the broader scientific community, as opposed to only engaging with your own professional society. I also think that it’s a way to demonstrate that you have expertise at the same level of others in a different specialist area; with more and more multi-disciplinary work, it is important that colleagues appreciate that you have the required knowledge and experience, which isn’t simply about academic qualifications.”