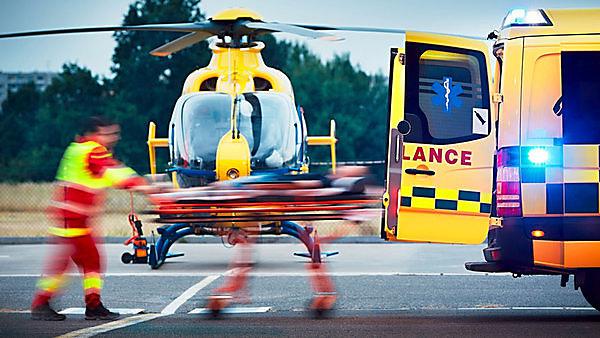 A revised approach to how emergency services respond to patients in motor vehicle collisions (MVCs) could help to save lives, according to new research.
In 2021 a total of 127,967 casualties and 1,560 deaths were caused by MVCs in England. Of these, over 7,000 patients needed to be assisted to leave their vehicle, in a process known as extrication. This often involves trained Fire and Rescue personnel using the ‘Jaws of Life’ (a hydraulic apparatus) and other similar tools to pry apart the wreckage, in order to free people trapped inside. During this process, patients may remain in their vehicle for an average of 30 minutes while slow, careful movements are used, in an attempt to avoid potential spinal injuries.
However, according to new research, this approach of ‘movement minimisation’ is in fact rather outdated and could be causing more harm to patients.
In a recent series of studies utilising the Trauma Audit Research Network (TARN) database, Professor Tim Nutbeam, Honorary Professor at the University of Plymouth and Emergency Medicine Consultant at University Hospitals Plymouth NHS Trust, suggested together with colleagues that spinal cord injuries after MVCs are actually quite rare, only affecting around 0.7% of all extrications. The benefit of current methods used for extrication may therefore be outweighed by the additional time taken to perform these manoeuvres, and for the 99.3% of patients who do not have a spinal injury, spending unnecessary time trapped in a car is linked to increased mortality rates due to other time-critical injuries.
Now, thanks to additional funding received by the Road Safety Trust, Tim has continued his research to evaluate the effectiveness of extrication methods used for people trapped after being involved in a MVC. Working in collaboration with colleagues across a number of organisations* including the National Fire Chiefs Council, the team utilised novel motion tracking technology to compare cervical and lumbar spine movement, recreating MVC situations with healthy volunteers.
With inertial measurement unit (IMU) sensors attached to each major segment of the body, the team were able to establish that using cervical collars, both whilst casualties remain in their car and during self-extraction (when they exit the vehicle with minimal or no assistance), can help to minimise spinal movements and therefore will stop an unstable fracture from causing secondary avoidable cord damage.
The early results from this series of studies also show that casualties who are able to climb out of the wreckage themselves are more likely to be able to lessen their spinal movement, thus also reducing the potential for spinal injury.
Tim, who is also lead doctor with the Devon Air Ambulance, said:

“Firefighters have been trained in the approach of absolute ‘movement minimisation’ since the 1980s, having been told that just 1mm of movement could turn someone into a wheelchair user. So understandably, crews will often disassemble a car around a patient to avoid any movement of their neck. But prioritising this can actually cause more harm to those trapped, due to the length of time taken. I wanted to research into this as I’d noticed a disconnect between concerns about spinal movement and the number of people dying in their vehicles or shortly after extrication. It felt important to investigate.”

As part of his work, Tim conducted a Delphi study to gain a consensus opinion across subject experts of the multidisciplinary guidance needed for extrication. A new set of principles are now recommended, including that self or minimally assisted extrication should be the standard first line approach for patients who are conscious and likely to be able to stand without assistance, and minimising entrapment time should be the goal for all patients.
He added:

“Currently only 3% of UK fire and rescue services use self-extrication on a regular basis, so we hope this new guidance will help to change that, both nationally and internationally too. We hope in taking an updated evidence-based approach we can improve patient outcomes, make better use of resources from all emergency services and reduce the impact of accidents on other road users.”

“We are thrilled that, through our funding, Tim Nutbeam and colleagues have been able to identify how historical extrication techniques used in motor vehicle collisions can be improved. This research will reduce both deaths and disabilities and help us achieve our vision of zero deaths and serious injuries on UK roads. We look forward to the practical application of this research being used by emergency services.”

The results of Tim’s research are now being widely shared. The United Kingdom Rescue Organisation have adopted the new principles for their Extrication Challenge in September 2022 after which the new guidance will be translated into National Operational Guidance for Fire and Rescue Services.
*Organisations include: Betsi Cadwaladr University, University of Cape Town, National Fire Chiefs Council, University College London, Kent Surrey and Sussex Air Ambulance, University of Coventry and Severn Park Fire and Rescue Centre.