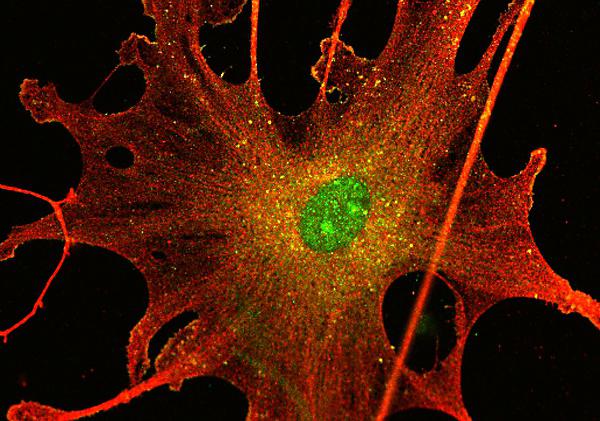 A report published today, 11 October 2016, by charity Brain Tumour Research shows that funding for research into brain tumours is still woefully inadequate, despite it being the biggest cancer killer of children and people under the age of 40.

The brain tumour research team at Plymouth University are members of one of four Research Centres of Excellence throughout the country supported by charity Brain Tumour Research. The team are European leaders in the investigation of low-grade brain tumours, which typically affect children and young adults.

Their work focuses on identifying and understanding the mechanism that makes a cell become cancerous and exploring ways in which to halt or reverse that mechanism. They test new drugs in human primary cell cultures and investigate how existing drugs could be re-purposed as a therapy for brain tumours, making drug therapies available to patients safely and more quickly. This is vital work, as the only treatments currently available for brain tumours are invasive surgery and/or radiotherapy.

According to the charity’s report, entitled the National Research Funding Report, fewer than 10 per cent of people in the UK know that brain tumours kill more children and adults under the age of 40 than any other cancer.

Brain Tumour Research commissioned a study of over 2000 adults. Respondents cited leukaemia as the biggest cancer killer of children and breast, lung and bowel as the biggest cancer killers of adults in the UK. The charity’s new National Research Funding Report is aimed at addressing the historical underfunding of research into brain tumours and the devastating consequences of limited treatment options for patients and families. The report highlights the need for substantial funding increases from three main drivers of brain tumour research spend:

Brain Tumour Research is campaigning to see the national spend on brain tumour research increased to £30 - £35 million a year, in line with breast and leukaemia, in order to advance treatments and ultimately find a cure.

The report, published today, describes the stark inequalities in cancer research funding in this country, which correlate tragically to poor survival rates for brain tumour patients. Fewer than 20 per cent of brain tumour patients survive beyond five years of their diagnosis, whereas 86 per cent of breast cancer and 51 per cent of leukaemia patients survive beyond five years. In 2005, five-year survival for brain tumour patients was just 14 per cent, so it is encouraging to see an improving trend, partly due to scientific advances particularly for medulloblastoma in children. However, survival is still far behind breast cancer and leukaemia, diseases that lead on levels of national research spend.

The figures demonstrate that the number of all cancer deaths of people aged under 75 actually reduced by 3.7 per cent between 2002 and 2015, due to advances in research. There was a significant lowering in the number of breast cancer deaths, which decreased by 18 per cent, and leukaemia which reduced 12 per cent. In contrast, people dying from brain tumours under the age of 75 increased by 10 per cent.

Since the NCRI (National Cancer Research Institute) began collating the research spend data of its funding partners in 2002, the average annual national research spend on breast cancer has been £34 million (8 per cent of the total) and for leukaemia £28 million (7 per cent). For brain tumours the average spend was just £4 million (1 per cent). This means £8,759 was spent on leukaemia research for each death, compared with £1,858 for brain tumours and £3,872 for breast cancer.

The financial burden has fallen heavily on the third sector. In 2015, charities funded 86 per cent of the national research into brain tumours. The charity has discovered, for the first time, that Government spend on brain tumour research represented just 0.52 per cent of its total spend on cancer research in 2015. The House of Commons Petitions Committee’s report earlier this year stated that “successive governments have failed brain tumour patients and their families for decades”.

Following a parliamentary debate on this issue, the then Health Minister, George Freeman MP, announced the setting up of a “Task and Finish” working group at the Department of Health looking at areas highlighted by the Petitions Committee report. The group, comprising charities, parliamentarians, researchers and clinicians, will meet for the first time on 18 October.

Every two hours, someone is diagnosed with a brain tumour in England. The report has also uncovered a shocking postcode lottery around the country, with the North East and South East both witnessing a 40 per cent rise in diagnosed cases (per 100,000 population), between 2011 and 2014, closely followed by London at 35 per cent. The South East also had the highest number of cases in total. At the other end of the spectrum, although still representing a substantial increase, was Yorkshire and the Humber with a rise of 13 per cent. Brain Tumour Research member charity, brainstrust, estimates that 55,000 people are living with a brain tumour in the UK.

“For too long, brain tumours have been a neglected cancer,” said Sue Farrington Smith, Chief Executive of Brain Tumour Research. “Along with our member charities, we have been campaigning for as long as the NCRI has been in existence to have our voices heard. The Petitions Committee has listened, highlighting that successive governments have failed brain tumour patients and their families for decades. The Government has now acknowledged that current funding is not enough. Working with the Government’s “Task and Finish” group, we will be challenging the Government and larger cancer charities to bring research into brain tumours in line with other cancers, such as breast and leukaemia.”

Research into brain tumours at Plymouth University Peninsula Schools of Medicine and Dentistry is led by Professor Oliver Hanemann, Associate Dean for Research. He said:

“We fully support our partner Brain Tumour Research in its effective campaigns to raise awareness of and funds for research into brain tumours. Its latest report makes for difficult reading, but we hope that it will galvanise policy makers and funders into action to provide more support our work and the work of colleagues across the country.”

£1 million a year is needed to continue the vital research at the Brain Tumour Research Centre of Excellence at Plymouth University. A local man recently left a gift of £100,000 in his will to research into brain tumours at Plymouth University, and a number of organisations offer support including Plymouth Argyle FC, Plymouth Raiders, Dartmoor Zoo, WBW solicitors, Bright solicitors, and local branches of Santander.