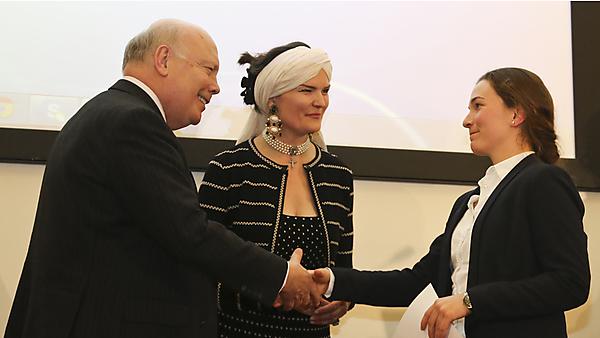 Stefania Guiu, a second year BSc (Hons) Nutrition, Exercise and Health student from the School of Biomedical and Healthcare Sciences at Plymouth University, has received a highly commended prize from a prestigious essay-writing award.

Stefania received her award from the Henry Kitchener Prize 2015, for her essay “How has the modern diet contributed to the increase in mental ill-health?” Her achievement was made all the more remarkable by the fact that all the others on the short list were either from the University of Oxford or postgraduate students.

“After sending an essay on “How has the modern diet contributed to the increase in mental ill-health?” for the Henry Kitchener Prize 2015, organised by the Institute for Food, Brain and Behaviour, I was selected for the shortlist of prizes and invited to the event in London where the winner was announced.

“Among the speakers was Professor Michael Crawford from Imperial College, London, who held a lecture on “The Global Crisis in Nutrition and Mental Ill-Health”. My essay was awarded as highly commended and attending this event was an amazing experience, developing an even higher passion for nutrition in me. Moreover, it also proved how amazing and diverse this area actually is and how important it is, not only for the time being, but also for the future.”