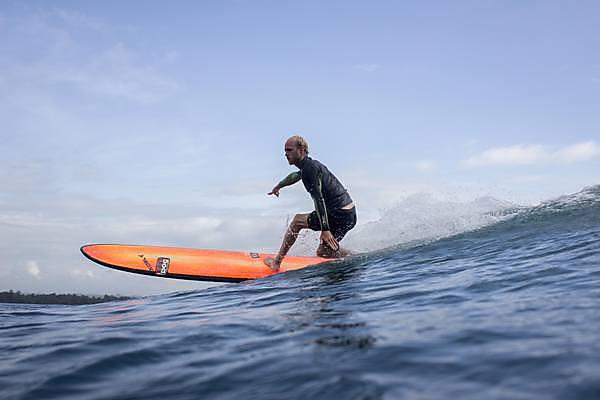 A top surfer and PhD candidate in the School of Engineering is celebrating finishing 5th in the ISA World Longboard Championships in Hainan, China.

Ben Howey took time out from the third year of his doctorate to travel to the contest as part of the Surfing England team – which also came in 5th overall.

As well as being one of the world’s best on his chosen craft at riding waves, Ben is an expert on what is happening beneath the surface and in particular, how to harness ocean swell as a source of renewable energy. His PhD focuses on the extent to which different parts of wave energy arrays can be connected together, and the impact on their performance and resilience. This involves physical and numerical modelling of oscillating water column arrays, and studying the effects of varying the level of inter-connectivity between the floating bodies.

Looking back over the contest, Ben said:

“I was very nervous before the event and flying out as I knew it was high profile, and I had to fight so hard to get my spot on the team so I had to do well! But after getting through the first few rounds the nerves began to ease as I had already surpassed my own expectation of how well I could do.

“The experience of competing in an event I have dreamt of being a part of since I was a child was very humbling. There were so many great people around and everyone was stoked just to be there, which was very refreshing.”

Ben also said that after years of study, he has perfected balancing the competing demands of university and sport. He added:

“I am now in the third year of my PhD, so I have had quite a few years to master the art of work/training balance - although training does take over sometimes!

“The difficult thing with surfing is that it’s so time dependent, in that to get the best waves you have to be there at the right tide, with the right swell and wind which is very difficult to plan for. So you will often find me working into the night, just so I can fit my hour of training in at exactly the right time.”

Ben is a University of Plymouth Sporting Excellence scholar. He is sponsored by Xcel Wetsuits, Skindog Surfboards and Dryrobe.