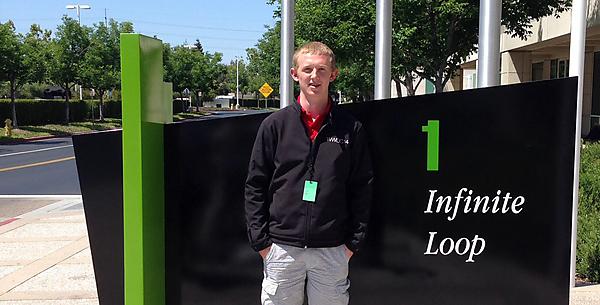 BSc (Hons) Computer Science student Josh Bruce, 20, was one of just 200 students globally to win a chance to be at the Apple Worldwide Developers Conference (WWDC) 2014.

The week-long event has brought together more than 5,000 of the planet’s top IT developers, and was used by the company to reveal its latest technological innovations to the world’s media.

To win his scholarship Josh, a former Fowey Community College and Cornwall College student, had to create his own interactive CV which was then pitched against thousands of similar entries from budding computer designers around the world.

He said: “I have always been interested in computers, and in particular how websites are created, but the chance to attend something as big as WWDC could really kickstart my career. There are very few bigger names in the world of computers than Apple, and to have successfully bid to attend this conference – against the top computing students from all over the world – will look great on my CV. It was also great to represent Plymouth, and show the world what the University can help you to achieve.”

Before coming to Plymouth, Josh had already set up his own web development company – Surftrack – through which he has worked with clients across the UK and in the US.

And after attending the conference this week, he plans to use his time in the United States to increase his expertise and contacts, having himself set up a series of meetings with some of the top software developers in the California area.

Professor Steve Furnell, Head of the School of Computing and Mathematics at Plymouth University, said: “This has been an incredible opportunity for Josh to rub shoulders with those at the cutting edge, and it clearly reflects the calibre of our students that he was able to win a place to attend.”