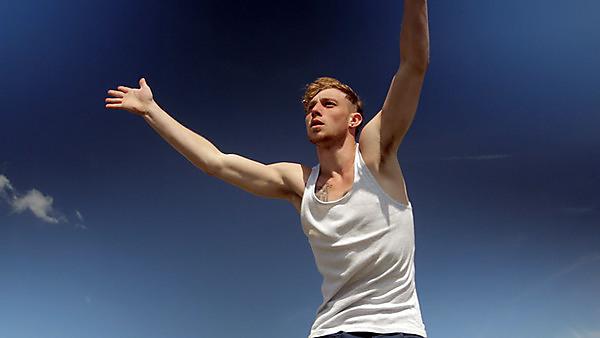 Adam Whiting in Heaven is a Place, a dance film made in Plymouth (Sundog Media, 2014)

Heaven on Earth? brings together creative practitioners from Greece, Spain, Turkey and Plymouth to explore the dynamics between people and ports.

It is inspired by the work of French writer, dramatist, film-maker and activist Jean Genet (1910-1986), and focuses on how his works and legacy remain relevant in the 21st century.

The Performing Arts department at Plymouth University is the British partner for the project, funded by the European Union’s Culture Programme, and has made a dance film using locations around the city’s waterfront with Genet’s work as its inspiration.

The film, Heaven is a Place, was made by Kayla Parker, Roberta Mock and Ruth Way, with emergent professional performers and members of Plymouth's Lesbian, Gay, Bisexual and Trans communities.

Roberta Mock, the film’s executive producer and Professor of Performance Studies at Plymouth University, says: “Heaven is a Place reflects our main concerns as artists and educators – that is, encountering and experiencing, presence and being present. It has allowed us to collaborate with some remarkable groups and individuals, many of whom had never performed before. It has also enabled us to celebrate the ideas and political commitment and remarkable achievements of Jean Genet, who continues to influence so much contemporary performance practice nearly 30 years after his death.”

In addition to making the film, the University will also be hosting three performances of Heaven On Earth? on Saturday 28 and Sunday 29 June in Theatre 1 of the Roland Levinsky Building, at 3pm and 7.30pm on the Saturday, and 7.30pm on the Sunday.

This poetic, physical theatre production, directed by celebrated Greek actress Vana Pefani and performed by an international ensemble of actors and dancers, starts when a bottle is found washed up in a harbour.

It tells the magical story of one of life’s castaways who learns anything is possible when a bridge is forged between reality and illusion. Performed in Greek, with projected English translation, Heaven on Earth?  is a stunningly visual, accessible theatrical experience.

On the afternoon of Sunday 29 June, Plymouth audiences can also attend the premiere of Heaven is a Place, and meet the company of Heaven on Earth? at an event called ‘The Jean Genie: Why Jean Genet Still Matters. In Plymouth (And Lots of Other Places). Right Now’.

This event, hosted by Plymouth Arts Centre, will also include a talk by Clare Finburgh, Senior Lecturer in Modern Drama at the University of Essex, and co-author (with David Bradby) of Jean Genet and co-editor with Carl Lavery of Genet: Politics and Performance. There will also be a talk by Alan Butler, PhD candidate at Plymouth University and co-director of Pride in Plymouth, an organisation that brings people together to celebrate and promote the diversity that exists within the city’s LGBT communities.

Audiences can take advantage of a special discount offer of a combined ticket for the afternoon of discussions (including the dance film premiere) and a performance of Heaven on Earth? by booking through Plymouth Arts Centre.