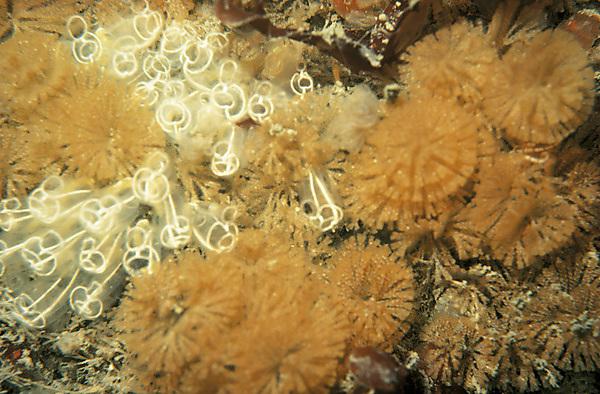 These changes to the climate, combined with increasing levels of pressure placed on the marine environment from man, are affecting the marine flora upon which a huge range of species depend.

Scientists fear that the changes will lead to the uncontrollable spread of invasive species, widespread changes in critical marine habitats and damage to shellfish and finfish fisheries.

The study – “The future of the NE Atlantic benthic flora in a high CO2 world” – was hosted at the Marine Biological Association as part of the UK Ocean Acidification Research Programme. It involved more than 20 international partners including Plymouth University, the Marine Biological Association of the UK and the Natural History Museum, and has been published in the scientific journal Ecology and Evolution.

Jason Hall-Spencer, Professor of Marine Biology at Plymouth University and one of the lead authors of the report, said: “Kelp beds are among the most productive habitats on Earth and are a major source of primary production in coastal zones of temperate and polar oceans worldwide. Other fleshy algae that dominate many intertidal habitats are also highly productive and play a key role in carbon capture and transfer in coastal ecosystems.”

The report was pulled together from decades of research involving laboratory and field work looking at the impact of human activities on marine flora, and the effect of CO2, which directly acidifies seawater and indirectly increases temperature and storminess, upon marine plant life. The study focused on the northeast Atlantic region, which includes coastal ecosystems of Portugal, Spain, France, Great Britain, Ireland, Iceland and Norway, among others.

Researchers found strong evidence that non-native species are invading – 44 species of macroalgae have been reported for the North East Atlantic – and they believe that melting polar ice caps and the increased presence of marine renewable energy devices in the water will aid the spread of these species. In the south west, for example, wireweed (Sargassum muticum) and Wakame (Undaria pinnatifida) are spreading rapidly along the coasts of Devon and Cornwall and radically altering local conditions.

If this pattern were to continue, the impacts of seawater warming, ocean acidification and increased storminess will decimate lush, diverse kelp forests, and the calcified algae that scallops settle upon are expected to dissolve away. These habitats support inshore fisheries, provide sanctuary for baby fish and stimulate news, oysters and mussels to settle out from the plankton. The expected disruptions would be fundamental to coastal economies worldwide.

Co-author Dr Dan Smale, of the Marine Biological Association, said: “In the southwest of the UK we have a wide range of marine habitats, from extensive kelp forests to seagrass meadows to maerl beds. These habitats support a tremendous diversity of marine life, which is of huge importance to regional fishing and tourism economies. However, the marine plants that form the building blocks of these ecosystems will be impacted by increases in temperature, acidity and storminess, with far-reaching consequences for regional biodiversity patterns, trophic linkages, nutrient cycling, and habitat provision.”

The report has called for ‘real-time’ mapping of some of the most important species of algae to monitor populations and whether they are adapting genetically to the changing conditions.

Professor Hall-Spencer concluded: “Unless CO2 emissions are curbed, we predict that by 2100, warming will kill off the kelp forests in the south, ocean acidification will remove maerl beds in the north and invasive species will thrive. What we find most staggering is how fast warming and the spread of corrosive waters will alter marine life around our coasts. Our shores will look very different in coming years, affecting people who make a living from the seas. Unless we take action, we will sleepwalk through radical ecological changes to our coasts.”