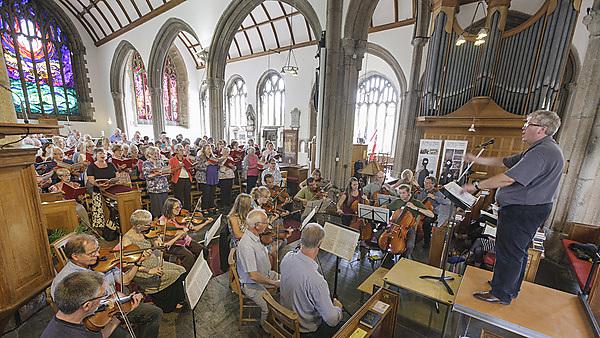 The concert, promoted by Peninsula Arts, will take place in the Minster Church of St. Andrew, Plymouth, at 7.30pm on Saturday 5 July. Admission is free with donations invited in aid of Brain Tumour Research.

Evoking the theatrical and virtuoso characteristics of Mozart, the man and his music; all are invited to enjoy this special performance of Mozart's Requiem which featured in the popular 1984 film Amadeus.

University of Plymouth is delighted to be working in partnership with Brain Tumour Research, which raises vital funds for research into the prevention and treatment of brain tumours.

The University of Plymouth's Faculty of Medicine and Dentistry is recognised as a world leader in research into low grade tumours of the brain and nervous system, which typically affect the young. The organisation is a Brain Tumour Research Centre of Excellence.

Sue Farrington Smith, Chief Executive of Brain Tumour Research said, “With nearly 500 people being diagnosed with brain tumours in the South West in 2011, it is wonderful to see the city backing this cause. Despite the advances in science and the growing opportunities for neurological investigation, brain tumours receive just one per cent of the national cancer research spend even though more children and adults under 40 die of a brain tumour than from any other cancer. We are urgently calling on people to help raise the funds needed to fund what researchers are calling ‘the last battle ground against cancer.”