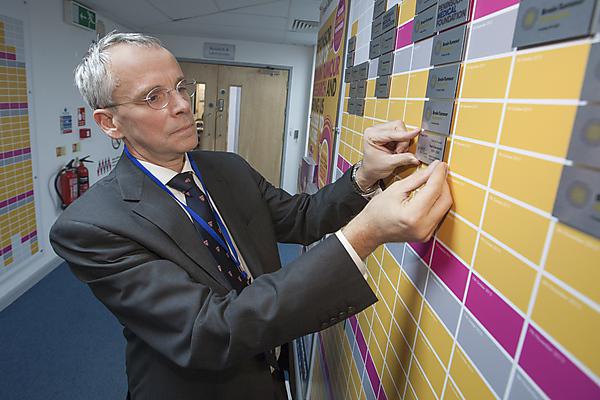 Professor Oliver Hanemann, Associate Dean Research and Research Lead for Brain Tumour, University of Plymouth, looks over the Wall of Hope at the John Bull Building

Many thousands of people who have lost their lives to brain tumours were remembered as a minute’s silence was observed to mark the beginning of national Brain Tumour Awareness Month.

The tribute was led by the national charity Brain Tumour Research and saw scientists and researchers at its four Research Centres of Excellence, including at Plymouth University, and people throughout the UK pause to reflect on lives lost and to think of those battling the disease which kills more children and adults under the age of 40 than any other cancer, yet has received just one per cent of the national spend on cancer research over the last decade.

The Brain Tumour Research Centre of Excellence at Plymouth University Peninsula Schools of Medicine and Dentistry fell silent when the charity’s research team, led by Professor Oliver Hanemann, laid a wreath and funeral director’s hat at the centre’s Wall of Hope, which provides a permanent tribute to loved ones. Floral tributes were kindly donated by Les Fleurs Florists of Paignton, and Walter C. Parson Funeral Directors of Plymouth loaned a hat for the ceremony as a poignant reminder of the UK’s premier brain tumour event – Wear A Hat Day.

“Since Brain Tumour Research was launched in 2009, the brain tumour community has been devastated by the loss of thousands of loved ones to a brain tumour. We want to remember them all and highlight the desperate need to improve outcomes for the 16,000 people who will be diagnosed this and every year, and increase the national spend on funding into brain tumour research.”

The research team in Plymouth are focusing on identifying and understanding the mechanism that makes a cell become cancerous. They are exploring ways in which to halt or reverse that mechanism. An innovation will be testing new drugs in human primary cell cultures leading to innovative phase 0 trials. It is hoped this will be followed by adaptive phase II/III trials with the potential for making drug therapies available to patients safely and more quickly.

This tribute marks the start of Brain Tumour Awareness Month which culminates on the 24 March with Wear A Hat Day. We would like people and organisations throughout the UK to join us on this day, hold an event and help us fund the fight. Together we will find a cure.